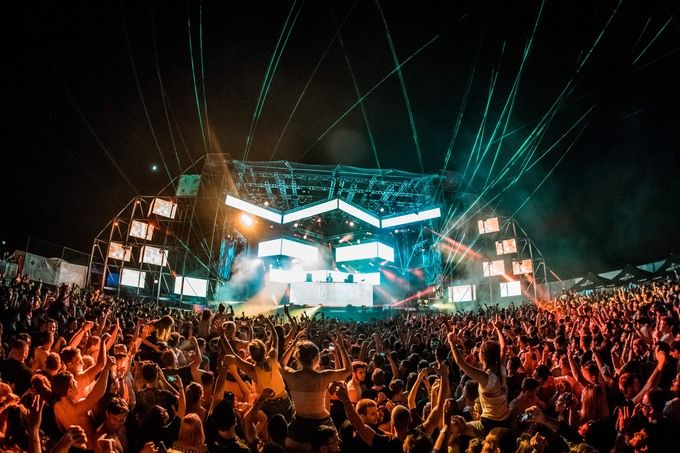 First acts confirmed for this year's edition is the artist who wrote some of the golden pages of music history and one of techno’s “founding fathers” Sven Väth, along with the absolute leader of today's electronic music, the charismatic and unique Nina Kraviz! While Papa Sven, as he is called by his die-hard fans, is seen as a frontman of European dance music and the uncrowned king of Ibiza whose Cocoon parties have been ongoing for a record-holding 20 years, in the same time no one defines the momentum better than Nina Kraviz, probably the most sought-after DJ of today and absolute headliner of the world’s biggest music festivals. Nina marked EXIT Festival in the last two years, playing the most prestigious closing slot of legendary Dance Arena with tens of thousands of people chanting her name, calling her out to many encores, as if it had been a stadium rock show in a moment not yet seen in electronic music.

Alongside Nina and Sven, Sea Star welcomes Ilario Alicante, the winner of the Best Techno DJ award of 2018 at the DJ Awards on Ibiza who made a name for himself as one of the biggest stars of the festival circuit. The next day will be equally exciting on the nearby Nautilus Arena, with Beatport's best selling act in 2016, Enrico Sangiuliano, joined by talented local support such as Croatia's techno mainstay Petar Dundov, and rising stars DJ Jock, Lawrence Klein and Unique.

More Sea Star festival acts will follow soon in a genre-oriented manner, with the next superstar announcement arriving in just a couple of weeks! The festival’s third edition will take place in the breathtaking Stella Maris lagoon, whose 80+ thousand visitors and numerous famous music names have already placed it among the most important festivals in the Mediterranean.

For more than 35 years, the name of Sven Väth has been synonymous with revolution and innovation in electronic music. Some dare say that it would be hard to find someone else whose life work has been more connected to the creation and promotion of an essentially underground sound, as well as its breakthrough to an audience of millions, all this without making compromises. Sven’s vision, starting from his first steps in 1982, through a huge amount of published works and the club revolution on Ibiza, as well as the progressive Cocoon Recordings, has always been the acknowledgement of the positive feeling that dance music brings. This was pointed out when Frankfurt awarded him the Goetheplakette in 2015 for the exceptional contribution to the cultural life of the city. In 2019, a special year which looks back on 20 impressive years of Cocoon Ibiza, the parties that forever modified club culture’s DNA, Papa Sven will create a unique mix at the Stella Maris lagoon with his record players, just as it’s expected at the Sea Star Festival.

There is no one quite like Nina Kraviz, with such dedication and an uncompromising attitude, but above all the courage to constantly push boundaries, curiosity to break new ground, desire to learn and lead by example the global electronic scene with countless titles, one of them being the Mixmag's DJ of the Year! Her sets break up the calm waters of the techno scene with brave musical surprises and artistic risks. This is why both fans and media see Nina as the trendsetter who spearheads the world's DJ scene, her own inimitable way. Following notable sets at the EXIT festival's closings in the past years, as well as numerous headline shows on major festivals, Nina Kraviz is coming to the magical Stella Marris lagoon in the moment when the whole world is watching her every step with enthralled attention. Her unique record label трип recently released it’s 23rd vinyl with artists on the labels including Aphex Twin, Nikita Zabelin, Marc Arcadipane, PTU and many others.

The Italian producer and DJ who is bringing his name to top of the electronic ranks, Ilario Alicante, debuted at the age of 15 and has gone from a music wunderkind to a great and respected act whose tracks have been published and played by greats such as Richie Hawtin, Dubfire or Sven Väth himself. Precicely due to tracks he released through the legendary label Cocoon, Alicante earned the Best Techno Artist award in 2018, while competing against some notable acts such as Alan Fitzpatrick, Amelie Lens, Charlotte De Witte and Nastia. After gracing the stages of festivals like Awakenings and Tomorrowland, as well as numerous Cocoon and Elrow parties, end of May will see him playing at the EXIT's sister festival in Croatia.

The third edition of the Sea Star Festival will be held at the famous Stella Maris lagoon in Umag, on May 24 and 25, with the Welcome Party on May 23 and the closing party on May 26. Tickets for Sea Star festival are available at THIS LINK. Accommodation and travel arrangements can be found at Exit’s official travel agency, ExitTrip’s OFFICIAL WEBSITE.