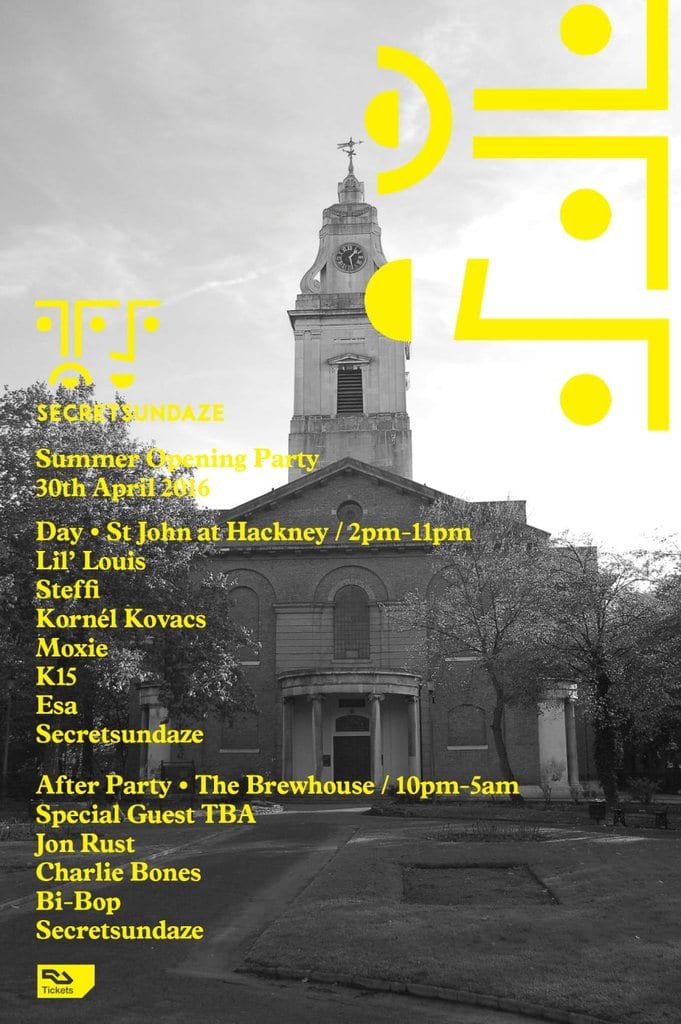 Secretsundaze kicks off the 2016 summer season on Saturday 30th April, with Lil Louis, Steffi, Kornel Kovaks, Moxie, K15 and Esa at the stunning church, St John of Hackney. Today the details of the after party are also revealed, taking place at The Brewhouse in London Fields.

The secretsundaze opening party is without doubt one of the highlights of the year and very much signals the beginning of summer. This year, for the first time in secretsundaze's history, the opening party will take place on a Saturday at the magnificent venue that is St John of Hackney

Headlining the party is Lil Louis. House music legend, pioneer and story teller, Louis has written and produced some of the most fantastic dance records ever, period. 'French Kiss', 'The Conversation', 'Lonely People' and 'I Called' to name a few. Another major player set to return is Ostgut Ton and Panorama Bar resident Steffi. Steffi has carved out a reputation as a formidable DJ that covers many bases within house and techno playing on both floors at Panorama Bar and Berghain and recently contributing to Resident Advisor's 500th Podcast alongside Dixon, Ben UFO and Omar S – a huge accolade.

Making his secretsundaze debut is Kornel Kovaks. His playful, bouncy sound on the likes of has Studio Barnhaus and Numbers have won him a legion of new fans and his set is sure to be a crowd pleaser. NTS DJ, London's very own Moxie also steps up, along with K15, Esa and of course founders and resident Secretsundaze.

The official after party will take place at The Brewhouse in London Fields, featuring a very special guest act to be revealed on the night, along with Jon Rust (Levels / NTS Radio),Charlie Bones (NTS Radio), Bi-Bop (ReviveHer) and of course secretsundaze.