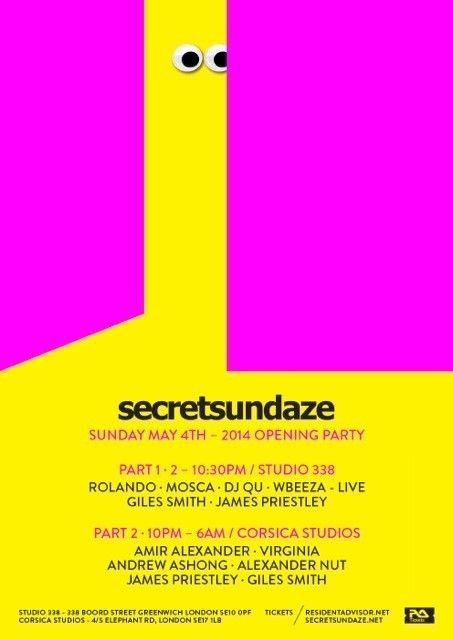 secretsundaze’s May bank holiday parties truly signal the start of summer.  For their official summer Opening Party they return to the terrace of Studio 338 where they have held the party for the last 4 years. The huge terrace at Studio 338 is a unique space; there really isn’t anywhere else in London quite like it. This year they have a huge line up with none other than DJ Rolando headlining. Rolando’s defining moment was of course his outstanding ‘Knights Of The Jaguar’ on Underground Resistance but he is still doing it today, regularly playing at Berghain and releasing on their seminal Ostgut Ton imprint.

Making his secretsundaze debut is Radio 1’s Mosca who of late is moving away from his UK roots to a deeper, more moody techno vibe. Next up all the way from NYC is secretsundaze favourite DJ Qu (Strength Music) with his dark, edgy, yet soulful and sublime sound. Due to unforeseen circumstances beyond our control Seven Davis JR will not be playing at the party but keep en eye on news of him playing for us later in the season. Instead one of London’s finest and secretsundaze regular Wbeeza will play live. Wbeeza has made some of the most standout records of the last years with ‘He’s So Crazy’, and ‘A116’ and his live set never fails to bring the house down.

For the night time session they will be moving to the more intimate Corsica Studios for 2 rooms of music with Chicago rising star Amir Alexander heading up Room 1 alongside Ostgut Ton’s Virginia. In Room 2 bringing the heat are 2 of the UK’s finest with Andrew Ashong who’s 2012 anthem ‘Flowers’ with Theo Parrish catapulted him to notoriety and unsung hero, tastemaker and DJs DJ, Alexander Nut of Eglo Records and Rinse FM fame.

For the daytime second bank holiday in May secretsundaze return to one of their favourite spots, Oval Space. The May party at the same time last year was off the hook with the 2 terraces at Oval Space in full use and the party at capacity all day. In 2014 they expect no less. The headliner for this date they can now reveal is Panorama Bar resident and Dolly records boss Steffi. Steffi is a fantastic DJ and one of the very finest to come out of the Ostgut / Berghain stable. Her music veers from booty bass to detroit vibes to lush deep house and her debut  LP from last year ‘Yours and Mine’ heralded her as a serious producer to boot. Supporting the headliner will be regular secretsundaze guest and one of Steffi’s old Dutch friends Martyn, a totally unique artist with his 3024 label showcasing his hybrid sound that takes in house, techno, bass and beyond.

secretsundaze are stoked to be holding the night time event at the amazing new basement of The Laundry in London Fields just around the corner from Oval Space. The basement at The Laundry is quite stunning and has that authentic but not scuzzy warehouse feel but with all the amenities one would expect from a top venue, plus it is a brand new space and almost virgin, party territory.

Headlining the night time is Ryan Elliott. The Detroit artist now lives in Berlin and is one of the few residents at Berghain that is invited to play both in Berghain and Panorama Bar showing his versatility, breath and skill as a DJ. We also extend a very warm welcome to Joey Anderson from New Jersey. Joey made his London debut with us last year and we are really looking forward to having him back. He has had an amazing last 12 months with some killer 12’s. April see’s his debut LP dropping on the esteemed Dekmantel stable.

Last up secretsundaze are extremely excited to invite A Sagittariun – live for his debut London show! A Sagittariun is a shadowy figure that has released an amazing batch of 12’s over the last few years on his own Elastic Dreams and it culminated in a killer LP ‘Dream Ritual’. Both Giles and James are huge fans of his cinematic, Detroity vibe and just had to get him onboard.

So the stage is set yet again for another fine start to the summer season with an array of amazing artists at some great venues across the capital. secretsundaze continues to put on some of the best parties for house and techno lovers in the UK.

Finally a gentle reminder that the secretsundaze Easter bash is the next event on Thursday 17th April with Derrick May, Deetron, Livity Sound, Arnaldo, Giles Smith and James Priestley. Currently on second release, this promises to be one of the biggest events on the Easter weekend in the capital.