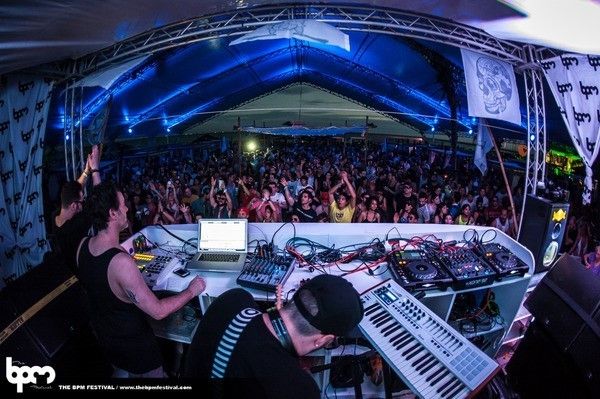 Bringing a style that fuses elements from pop¹s dark electro past with an intense forward stare into the future, the Toronto-based trio known as My Favorite Robot (composed of Jared Simms, James Teej, and Voytek Korab), bring their live show to Output in Brooklyn on Friday, April 4 for their inaugural stateside performance following a highly successful run at The BPM Festival 2014 during the No.19 Music Showcase. “Jonny White [from Art Department] really challenged us to get the live show going. It was a huge challenge that we put on ourselves to get the show ready for The BPM Festival. After five years of producing together with lots of music.. [having] the opportunity to perform for a live audience was something I’ve never really experienced before,” Simms explains. “The tracks we’re playing [are a] mix of all of the music we’ve done over the past four years.”

With Korab providing emotive, ethereal vocals, Teej on the guitar and keyboard, and Simms manning the controls, the group brings a selection of their favorite releases across the spectrum to life. Some of the highlighted tracks My Favorite Robot will play out include “The Waiting Rain” [Life and Death], “Forest Fires” [Visionquest], “Undertow” [My Favorite Robot], and “Centreofattentionaut” [No.19 Music].

Don’t miss the omnivorous beat-maker Eats Everything and Saved artist Lauren Lane alongside My Favorite Robot in the main room at Output, with MOOD and Kompakt producer, Dave DK in the Panther Room. Join My Favorite Robot as they catapult their distinctive sound across the globe to South America, Europe and Canada in the upcoming months.