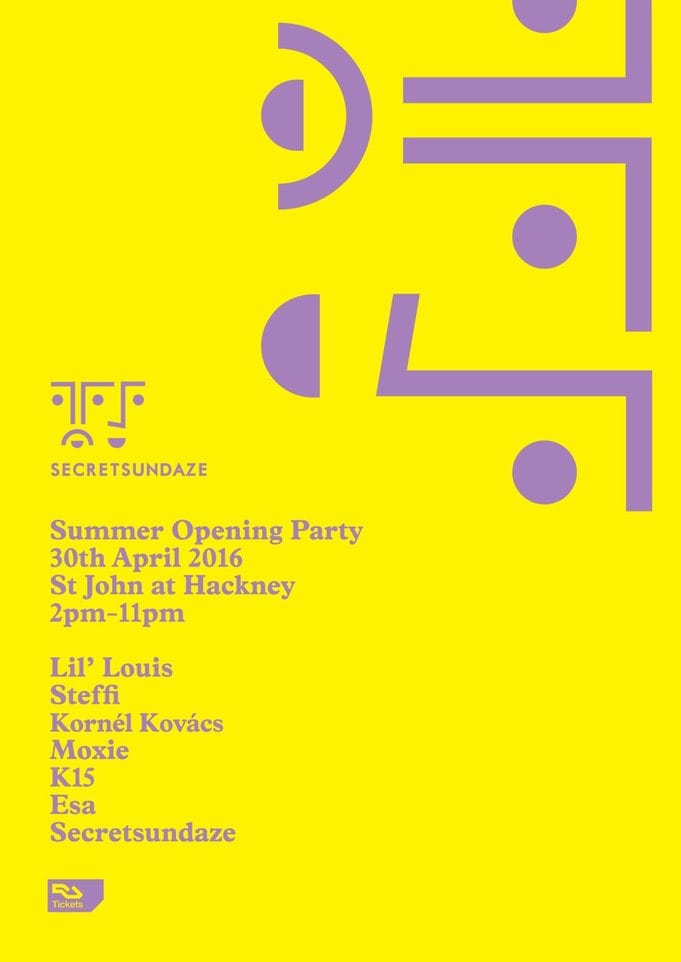 Secretsundaze kicks off the 2016 summer season on a Saturday, with Lil Louis, Steffi, Kornel Kovaks, Moxie, K15 and Esa at the stunning church, St John of Hackney.

The secretsundaze opening party is without doubt one of the highlights of the year and very much signals the beginning of summer. This year marks the 15th anniversary season and the opening party venue and line up is very much befitting of such an occasion.

This year, for the first time in secretsundaze's history, the opening party will take place on a Saturday at the magnificent venue that is St John of Hackney. The Church of course has regular Sunday services hence the decision to move the party to a Saturday. For those that haven't been to St John, it’s an incredibly beautiful space and the likes of Jamie XX and Coldplay have played in then last few years. Many referred to going to the Paradise Garage and Berghain as Church – well this is the real thing!

Headlining the party is Lil Louis. House music legend, pioneer and story teller, Louis has written and produced some of the most fantastic dance records ever, period. 'French Kiss', 'The Conversation', 'Lonely People' and 'I Called' to name a few. He is first and foremost a DJ of the highest order and anyone that saw him at secretsundaze in 2012 will testify. His sets roam across disco, funk, house, afro, techno and anyone that say the video of him rocking out at Concrete in Paris will know that he is still knows how to turn it out!

Another major player set to return will be Ostgut Ton and Panorama Bar resident Steffi. Steffi has carved out a reputation as a formidable DJ that covers many bases within house and techno playing on both floors at Panorama Bar and Berghain and recently contributing to Resident Advisor's 500th Podcast alongside Dixon, Ben UFO and Omar S – a huge accolade.

Making his secretsundaze debut Kornel Kovaks. His playful, bouncy sound on the likes of has Studio Barnhaus and Numbers have won him a legion of new fans. He is of course one of the 3 key members of Studio Barnhaus alongside the likes of Axel Boman and his set is sure to be a crowd pleaser.

Moxie has been doing her thing for many years and is proud of her London roots. Radio has always been the best way to catch her whether it be Rinse, Radio 1 and now NTS but she also rocks the party. Cutting her teeth as a DJ as one of the residents at Benji B's Deviation and now with a busy touring schedule that takes in the likes of Dimensions, Nuit Sonores and Glastonbury.

South London's K15 steps up for his second outing at secretsundaze with his soulful, roots driven sound. He rose to notoriety with his double 12” for Kyle Hall's Wild Oats in 2015 but has been releasing music and DJing for many years. He has recently collaborated with Henry Wu as WU15 for Floating Points and Alex Nut's excellent Eglo.

Last up we have all the way from South Africa via Hackney Wick, Esa. Esa is perhaps best known for his involvement as one half of Auntie Flo the project that fuses electronics and world influences, most notably his South African roots. They have released two LP's to critical acclaim. He is also responsible for the Hi-Life parties and label of the same name.

Secretsundaze, as founders and residents, will warm things up and close the party as only they know how.

This promises to be one of the highlights of summer – Lil Louis, Steffi, Kornel Kovaks, Moxie, K15, Esa and Secretsundaze all playing at the stunning St John of Hackney.