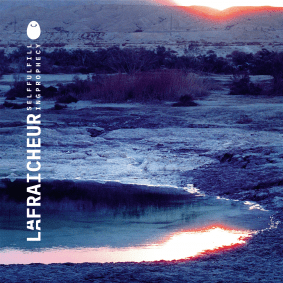 InFiné has long put out music by Detroit greats from Robert Hood to Juan Atkins, and the label’s latest album project comes from a new school heroine who has been welcomed into the famous Underground Resistance studios by the legendary Mike Banks. She is La Fraicheur and she impresses across nine fantastic new tracks all written in that iconic Detroit studio space.

La Fraicheur is a French-Berliner producer, a tireless DJ who is resident at Wilde Renate and Mensch Meier, and someone who stylistically oscillates between epic techno, dark electro and deep-house. She is also a committed feminist, an active participant of the Female:Pressure network, who aim to strength the place of women in electronic music, and a fervent member of Berlin’s queer scene where she is a regular guest at the cities hottest parties including Gegen, Pornceptual and House of Red Doors. Her debut album reflects this politicism and passion with use of speeches and spoken word samples from the likes of the Black Panther’s Angela Davis. It is a real statement both of her skills as a producer and her social intent, in her own words she “wants to use moments of dancing to stimulate a bit of political awakening.”

The deliciously dark ‘Gone’ has kinked drum patterns and whirring machine sounds next to withering arps before ‘Morgan’ offers up a beautiful interlude with floating chords and broken glass sounds sinking you into a reverie. ‘The New Is Not Yet Born’ has more striking spoken word samples married to deep, bumping kicks whilst ‘Eaux Troubles’ is a melodic techno jam with thoughtful keys and forceful rhythms wrestling for your attention. There is more languid deep house on ‘Limb By Limb’ and tense, pumping, turbulent closer ‘Plant 21’ ends things on an utterly arresting high.

This is an album full of expressive and original sounds that are hard to categorise. They manage to be both cerebral and cinematic as well as aligned for the dance floor, and mark what is surely going to be a breakout work for this talented artist.