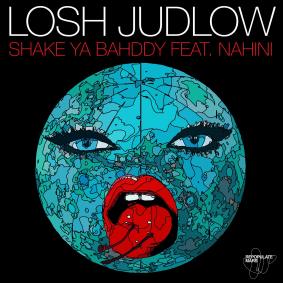 DJ/producer/model Josh Ludlow has been producing under different aliases for years but his first release under the Losh Judlow moniker marks a huge change in style from his previous projects.

“’Shake Ya Bahddy’ came about when I was on my way home from dinner. I saw this guy busking and was so into the vibe I persuaded him to wait for me whilst I rushed back to my studio to grab a portable recorder. I quickly threw together a beat for him to play too and zipped back to find him.

When I got back Nahini had vanished, but luckily I had taken his number and after a few missed calls Nahini picked up and agreed to come back. He told me he was from the Ivory Coast and living in shelters in London. I bought some beers and we recorded a session in an empty car park in Notting Hill Gate. I stayed in touch with him for the next year or so occasionally meeting up to lend him cash but I havn’t been able to contact him since. There are also a lot more vocals so watch this space for more Nahini trax!”