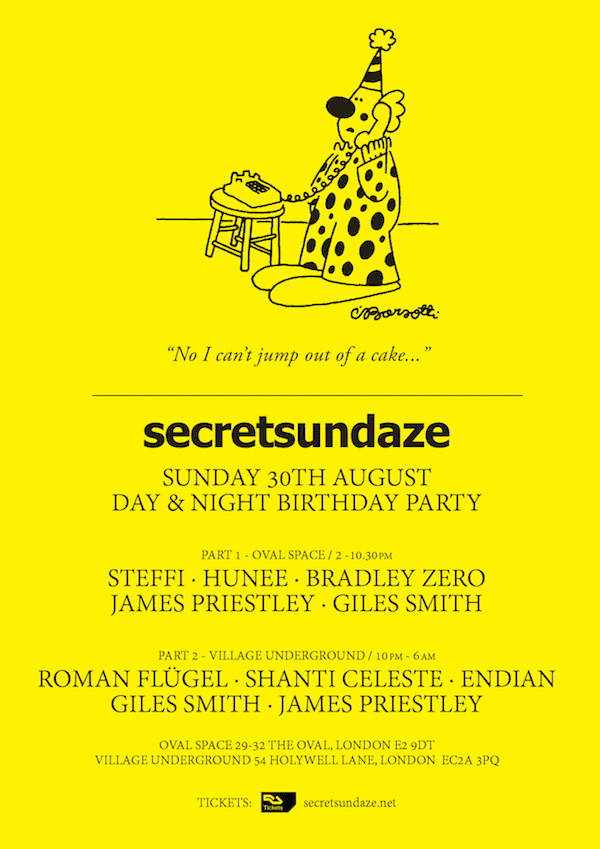 Part one of the double header takes place Oval Space, headlined by Panorama Bar resident Steffi. The Berlin-based DJ has become a force to be reckoned with, with her distinctive sound that roams from classic deep house to slamming techno to breakbeat and booty bass. Joining Steffi is Hunee, perhaps most famous for his DJ sets which are a romp through funk, soul, disco, house and techno all served up from behind the decks with great panache, and Boiler Room host Bradley Zero.

Headlining the nighttime edition at Village Underground will be one of dance music’s longest serving ambassadors, Roman Fluegel. A musical chameleon and a man of many talents, expect to hear techno, bleepy house and futuristic Italo disco. Following a stellar secretsundaze debut back in January, Shanti Celeste returns for round two, bringing influences from her native Bristol combining with more housey flavours from both Chicago and Detroit. The final guest for the nighttime is Endian, who’s recent EP ‘Finish Me’ a breakbeat/techno hybrid on secretsundaze, has received props from the likes of Joy Orbison, Marcel Dettmann, Scuba and Midland.

With two of London’s finest DJs and residents, Giles Smith and James Priestley, warming up and closing the party, the scene is set for another classic secretsundaze summer party.