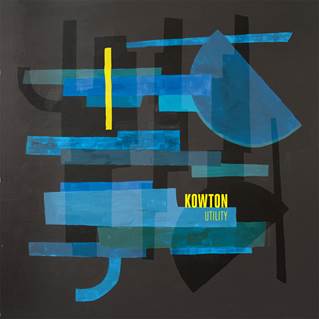 Available from 15th April 2016, ‘Utility’ is the stunning longplayer by Livity Sound co-founder Kowton, a debut album release for both the artist and the label. Combining the powerful reductionism of classic Detroit techno with the inventiveness and originality of the Bristol sound, Kowton has produced a body of work that will no doubt be looked back upon as a landmark UK techno album.

While his trademark hypnotic rhythms, dramatic transitions and chest-rattling bass are all present and correct throughout, ‘Utility’ is more than just a collection of club tracks. Here Kowton has distilled both his influences and experience to create an immersive journey that twists and turns, encompassing not only weapons-grade 4/4 techno, but also geometric minimalism, deep abstract dance and skeletal, grime-influenced ambience.

"The name ‘Utility’ came from a series of conversations I had in the build up to finishing the record; what feels most prescient to me right now is writing concise music with purpose and direction – visceral music that’s uncluttered both sonically and theoretically”, explains Kowton. “I wanted to create an LP that works on the floor but is nuanced enough to justify repeat listens and self-aware enough to sit properly as a complete album.”

From the opening bars of ‘Comments Off’, we’re straight into the fray: the booming bass and intricate staccato rhythms coaxing the listener into a tunnel of repetition only ruptured by bursts of sub-bass. This sets the tone: each track on ‘Utility’ is comprised of very few elements, but it’s what Kowton does with them that makes it such an engaging listen. Take the Sahko-indebted bleeps of ‘Balance’, for example, as Kowton layers them into a cerebral ping-pong before unleashing its brazen percussive chassis.

Following the immersive ‘Scido’ and pummeling ‘Sleep Chamber’ the tempo drops for  mid-album centrepiece ‘Some Cats’, which writhes on a slippery arpeggio providing brief  respite. Things kick back up a gear with the disarmingly stark and simple minimalism of  ‘Loops 1’, segueing perfectly into the frenetic polyrhythms of ‘Bubbling Under’. ‘A Bluish Shadow’s spaciousness is the final calm before the storm of album closer ‘Shots Fired'  where hints of bitter sweet melody meld with staccato subbass and disorientating arpeggios.

‘Utility’ may be Kowton’s debut LP, but he’s definitely no newcomer. Over the years he’s accumulated sonic influences and geographical bases that span way beyond Bristol and its associated categorisations, eventually leading him to Peckham in South East London, where he now resides. Born in the relative isolation of Grasmere in the Lake District, Kowton’s early musical education depended greatly on late 90s print magazines like Jockey Slut and Muzik, plus the blistering techno favoured by the local rave community.

“In the late 90’s the way we consumed music in the Lakes was incredibly different to anything that happens now. We’d buy tape-packs from Eastern Bloc in Manchester, or loan Metalheadz and Moving Shadow CDs from the local library. There were the monthly magazines and people’s older brothers, but our knowledge of scenes as a whole was patchy. As we got older there were always quarry raves going on but the music there was hard techno and if we ever got a warm-up slot it wouldn’t last long.”

Kowton studied at music college in Manchester from 2003 to 2007. Heavily influenced by the staff at Pelican Neck Records (Boomkat's old physical shop) he became aware of seminal European techno artists like Basic Channel, Monolake and Mika Vainio. A period of record buying obsession coincided with the golden era of grime and dubstep and soon Kowton’s attentions were concentrated on the stream of new 12”s coming from labels like Tectonic, DMZ and Tempa. This combination of low end pressure and European repetition has come to define Kowton’s sound.

In 2008 he moved to Bristol, coinciding with a change musical direction, as the city, and the UK underground as a whole, began to once more embrace house and techno. An integral part of the team behind the newly minted Idle Hands record shop, it was their accompanying record label that allowed him to explore the possibilities of the darker end of dance music. The series of 12”s Kowton released for the label drew comparisons with German wizard Kassem Mosse, known primarily for his ability to employ obtuse rhythms in a manner that still kept the dance floor bubbling.

Around the same time, Bristol luminary Peverelist began sharing ideas and collaborating in the studio with Kowton, the pair eventually linking with Asusu to form Livity Sound: a label and collective intent on creating no nonsense dance music with an emphasis on pared down rhythms and classic sound system approaches. The critically lauded opening salvo of releases the label put out culminated in the accolades of Resident Advisor’s #1 Label Of The Year and #2 Compilation Of The Year for ‘Livity Sound’. The trio subsequently assembled a powerful live hardware set-up, using improvisation and dub effects to meld their music together into a thrillingly raw, unbroken whole.

Over the course of the last five years, Livity Sound have cultivated a reputation for releasing some of the most exciting and visceral UK dance music of recent times, placing Kowton's grime-infused techno alongside Pev's exquisitely balanced rhythm science and Asusu's atmospheric, percussive club tracks. Resident Advisor called the label’s output “some of the most inventive dance tracks in recent memory”, with the trio at the forefront of a new wave of UK techno that’s as much about pushing originality, experimentation and futurism as it is about club functionality.

“Starting to work with Pev and Asusu on the Livity Sound project did a lot to edify for myself how I felt about dance music: I’d felt a little dislocated previously, writing moody techno but playing things like Theo Parrish and Soundstream records. With Livity Sound – and particularly the live show – we were just playing music we’d written and it felt so satisfying. We hadn’t invented a sound but we’d definitely cemented our own take on techno. It's changed the way I write tunes and DJ significantly.”

As a solo artist Kowton has been equally busy: his stellar run of brutalist, grime-infused bangers (‘Des Bisous’, ‘TFB’ and ‘H-Street’) pricked up the ears of many leading DJs, he’s remixed Paul Woolford's classic 'Erotic Discourse', collaborated with the much hyped house producer Julio Bashmore on their murky Ekranoplan project and released on Hessle Audio, All Caps, Hemlock, Ilian Tape, Hotflush and R&S. More recent additions to his catalogue – such as the synth trill tension of ‘Glock & Roll’ and the stratospherically euphoric pads of Peverelist collaboration ‘End Point’ – have highlighted the more playful and melodic elements of his sound while still imbued with a heavily immersive atmosphere.

There’s been many facets to Kowton’s musical evolution, the constant feature throughout though has been a focus on effective, stripped-back, raw tracks that reduce dance music to its essence and in doing so give the form new life and energy. Simple utility done well.