Mike Kiraly - Si Mani Revisited / We Get Messed Up 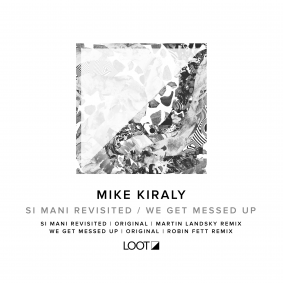 Mike Kiraly - Si Mani Revisited / We Get Messed Up

After his last release on the label picked up support from Joris Voorn and Davide Squillace, Mike Kiraly is back on Loot with another essential two tracker that comes with remixes from Martin Landsky and Robin Fett.

American Kiraly is someone with 25 years experience in the game, finding his own tough house and tech sound in that time. A deep passion for studio gear, modulars and vintage synths make his tracks really pop, while as a DJ he has played all over the world. Here he is in devastating form once more for Loot.

The downright filthy opener ‘Si Mani Revisited’ is laced up with modular synth effects as twisted sounds swirl on the edge of madness. A big, punchy bass line commands your attention as an androgynous vocal sample plays over and over, further taking the dance floor down the rabbit hole.

Esteemed Poker Flat veteran Martin Landsky is on remix duty and heads straight for the club with his signature style of tough rhythms. He teases and tweaks the vocal sample to create tension throughout the track, cleverly adding builds and breaks to increase the energy in all the right places.

Kiraly’s next original is the superbly freaky ‘We Get Messed Up’. With undulating drums, unhinged vocals repeating over and over and dark synths, it is a mesmerising tune that dials up the energy like a slow boil. A monstrous rolling bassline underpins the whole thing and is peppered with crazy effects that will send the club wild.

Last but not least, label associate Robin Fett again operates in the woozy region between house and techno with a deep, tasteful interpretation. His atmospheric track is stripped back but filled with future soul as the newly treated main vocal becomes a hypnotic hook above silky drums.

These are four fantastic club tracks that each offer something different for the club.