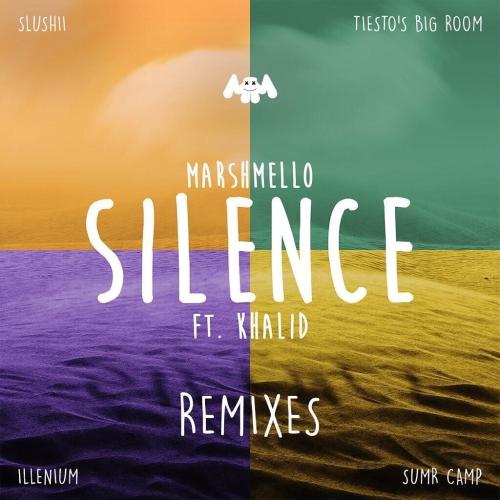 Having enjoyed a meteoric rise like no other before him, masked mogul Marshmello sits firmly at the forefront of dance music today, becoming the posterboy for the current crop of the booming electronic music generation. Now, his hit new track ‘Silence’, which is currently sitting top 20 in the UK charts andtop 10 in the iTunes, is given the remix treatment, with Illenium, SUMR Camp, Slushii, and dance legend Tiësto all delivering their own interpretations of the huge Khalid collaboration, ahead of Marshmello’s sold-out headline show at Brixton Academy on 21st October.

Bringing horns and a big room feel to the piece, Tiësto utilises his decades of production prowess to craft looping vocals, and a thumping drop, before San Francisco-based producer Illenium produces a contrasting melancholic reworking, which brings a powerful and emotive feel to 19 year old singer-songwriter Khalid’s smooth vocals. Bringing deep house elements to his first ever official release, mysterious producer SUMR Camp shines, displaying a groovy bass-led beat, with Marshmello’s good friend Slushii lacing his own remix with his signature trap sound. The American, who has previously worked with the likes of Ookay, and Mello himself on collaborative track ‘Twinbow’ after catching the attention of OWLSA boss Skrillex, will also play as a support act for Marshmello at the Brixton Academy show on 21st October.

Marshmello, the anonymous Producer/DJ is taking the music industry by storm. Becoming one of the fastest rising dance producers in history, his fan base ranges from children to adults who have helped him gather over 2 billion streams and over 300 consecutive sold out shows worldwide. Catapulting his career with his official remix of Jack U and Justin Bieber’s global hit ‘Where Are U Now’ which collected over 36 million plays on Spotify & SoundCloud in less than six months. The masked producer’s debut album,‘Joytime’, charted at #1 on the iTunes Electronic Albums on release day and landed in the Top 5 on Billboard’s Top Dance/Electronic Albums. Marshmello’s track ‘Alone’ (Click HERE to watch the music video) propelled his monumental success with over 106 million Spotify plays and over 800million video views, making it certified Platinum in only 1 year. As the layers of mystery continue to surround the man behind the mask, there is no doubt Marshmello’s rapid takeover of the electronic-sphere will continue to leave everyone wanting more.

Joining Mello on ‘Silence’ is Khalid, whose ‘American Teen’ release has received mass critical acclaim with the 19 year-old subsequently embarking on his first-ever headline tour across USA and Europe.Khalid has over one billion streams worldwide across all platforms and was recently nominated for a Teen Choice Award for Choice R&B/Hip-Hop Song for ‘Location’, with the production gaining certified double platinum status in the US.

Currently in the midst of a hectic touring schedule, Marshmello has already performed in the UK this year, with a headlining show at London’s Ministry of Sound back in February, and further performances at Reading and Leeds festival, Clapham’s South West Four, and Creamfields across August Bank Holiday weekend. With dates in Ibiza this summer at Ushuaia and Amnesia, the masked producer has never felt more in-demand to his fanatical ‘Mellogang’ fan-base, or the dance music world as a whole.