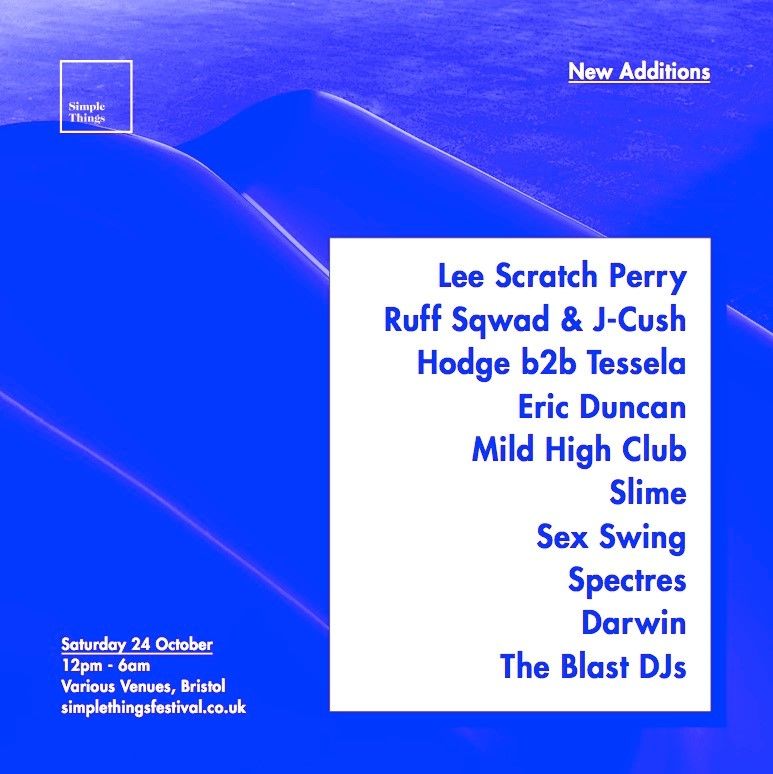 Pioneering multi-venue festival Simple Things have bolstered their already weighty lineup, adding a host of eclectic acts to the billing as they take over Bristol’s clubs, theatres, fire stations and prison cells on October 24th.

Legendary reggae innovator Lee ‘Scratch’ Perry will be touching down in Bristol for his first performance in the city in over two years, pairing his inimitable stage presence with a full live band as he delves into his expansive back catalogue of cosmic dub excursions.

Following the massive addition of JME & Skepta a couple of weeks ago, the Simple Things team have brought yet another revered grime collective into the fold: Ruff Sqwad & J-Cush. Ruff Sqwad’s advent in 2002 brought grime form the streets of East London to a national audience, setting the stage for its meteoric rise to prominence over the next decade. The crew will be joined by Lit City Trax founder and Future Brown mainstay J-Cush for a rare performance outside of London.

Whilst the daytime programme of Simple Things leans towards live performances, the evenings and night time has always been the preserve of cutting-edge underground DJs, and this year is no different- celebrated UK techno artists Hodge and Tessela have just been added for a marathon four hour back-to-back session. Rub-n-Tug co-founder and NY disco extraordinaire Eric Duncan will also be joining proceedings with the Futureboogie cohort, whilst Berlin mainstay Darwin makes her Bristol debut. The remarkable Giant Swan are also set to bring a truly original performance to the Simple Things stage.