Ska Spectacular To Return To The UK In May 2018 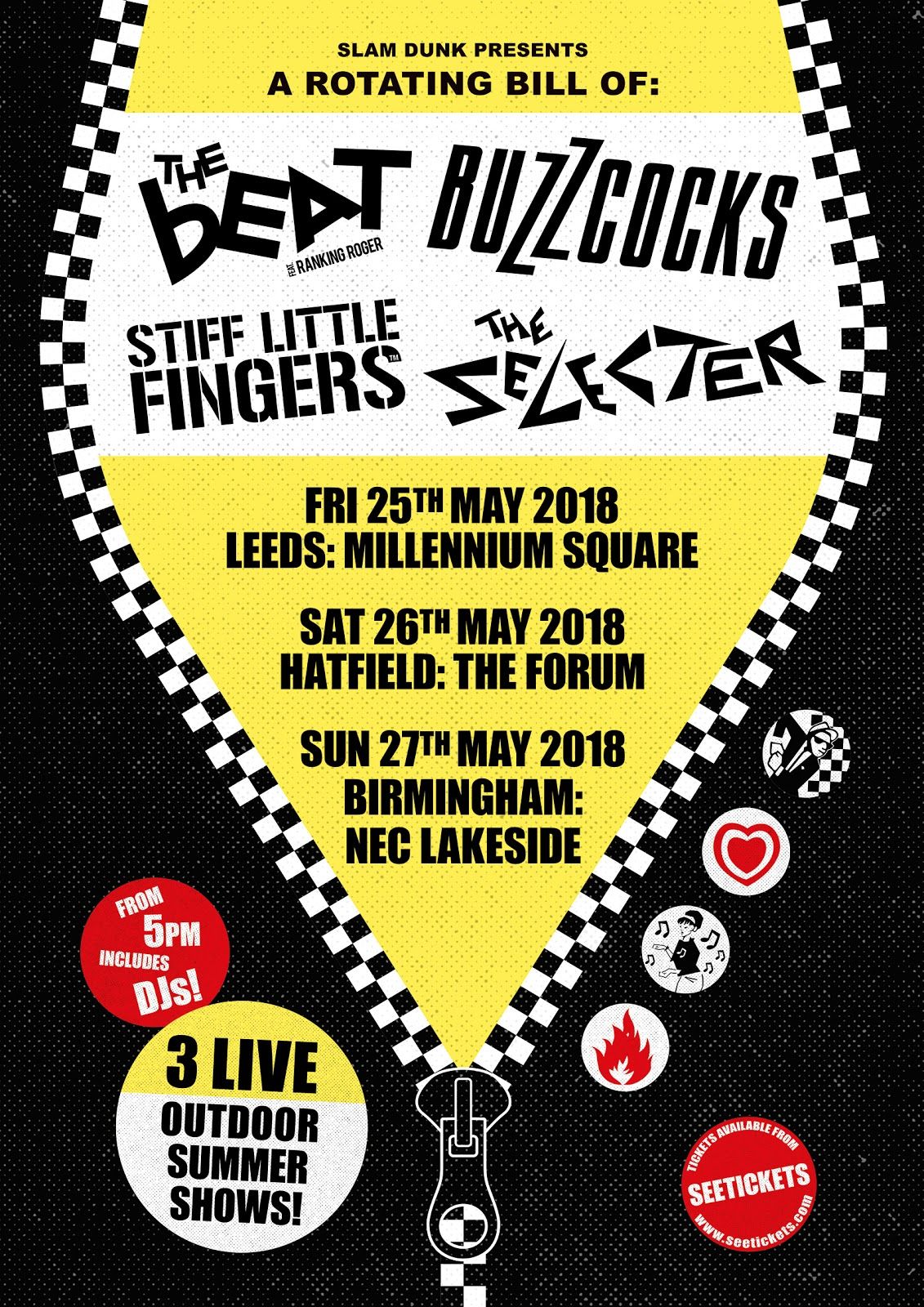 Ska Spectacular To Return To The UK In May 2018

After the blistering success of the 3 inaugural outdoor events which saw The Specials and Toots & The Maytals play on the same stage for the very first time, those behind Slam Dunk Festival are back once again to deliver another iconic run of shows.

This summer, fans of ska & original punk music will be sure not to miss the extravaganza as the legendary The Beat, punk icons Buzzcocks, 2-tone boundary-pushers The Selecter and Belfast’s own Stiff Little Fingers will join forces to create a once in a lifetime opportunity to see an ultimate line up combining original ska & punk. They’ll play three very special co-headline shows in Leeds, Hatfield and Birmingham at the end of May Bank Holiday to kick-start the summer with an energetic mix of iconic anthems.

Unquestionably one of the most musically diverse bands to come out of the multicultural explosion that remade British pop from 1979 onwards. The Beat have continued to deliver their explosively upbeat and reggae-tinted melodies since the height of 2-Tone/Ska boom. Joining frontman Roger in the revitalised band is his son, Ranking Junior AKA Matthew Murphy, a powerhouse MC who brings to the band an update on the toasting that made Ranking Roger such a pivotal part of the original Beat. The same energy that drove the seminal singles of the 80s; ‘Mirror In The Bathroom’, ‘Hand’s Off She’s Mine’, ‘Tears Of A Clown’’ and ‘Too Nice To Talk To’, runs through the band to date.

Responsible for fierce hits such as ‘Ever Fallen In Love (With Someone You Shouldn’t’ve), ‘Orgasm Addict’ and ‘What Do I Get’, Buzzcocks are true cult sensations that have stayed true to their punk sensibilities. Pulling no punches throughout their entire career, the band have established themselves as leaders of the first wave, packing raw lyricism into their riotous anthems. Pete Shelley and Steve Diggle have continued to deliver their critically acclaimed hits as fearlessly as they were first written, these shows promise to be a truly unique moment to celebrate the career of a band who shaped an entire genre.

Led by their iconic frontwoman Pauline Black, alongside an incredible talented band of musicians, and co-fronted by original member Arthur ‘Gaps’ Hendrickson, The Selecter are regarded as one of the best live acts of the century. The anarchic passion that fuelled Selecter gigs during the 2 Tone era runs through every one live shows. Storming through hits like ‘Three Minute Hero’, ‘Missing Words’, ‘Too Much Pressure’ and ‘On My Radio’. They released new studio album Daylight in October 2017 – with their most urgent, politically engaged and purely uplifting music since the days of ‘Celebrate The Bullet’.

The energetic Ireland-founded group Stiff Little Fingers will join the line-up with their signature lyrical prowess that melds the personal political, and melodies that fuse the rawness of punk with infectious hooks and sincere delivery. Their debut album ‘Inflammable Material’ broke records as the punk band became the first act to hit the UK Top 20 charts on an independent label, cementing them as a groundbreaking influence on many of today’s punk bands. Although always legends of the underground, the band still had hits with ‘Alternative Ulster’, ‘Gotta Gettaway’ and ‘Suspect Device’.

Roger Ranking of The Beat says:
“We have had the pleasure of sharing the stage with The Selecter for a while now and it makes for a great evening. Looking forward it’s a fantastic to also be playing with Stiff Little Fingers and The Buzzcocks as they were influential to The Beat’s first sound and certainly got me jumping up and down back in the day. I’m really looking forward to these shows with more of my heroes.”

Pauline Black of The Selecter says:
"Who doesn't enjoy a punky ska & reggae party? The Selecter most definitely does! This lineup will be like playing with old friends."

Jake Burns of Stiff Little Fingers says:
"SLF will be playing three very special shows in May next year. We were delighted to be asked to join The Selecter, Buzzcocks and The Beat for three shows in Leeds, Hatfield and Birmingham. We're very much looking forward to playing with these terrific bands, who also happen to be long time friends. Bring it on!"

The co-headlining bill will see the 4 iconic artists rotate slots over the 3 days, the result of which will see The Beat, Buzzcocks, The Selecter and Stiff Little Fingers all playing a full headline set. A truly unique show and valued show, set to be a celebration of music from the modern era.