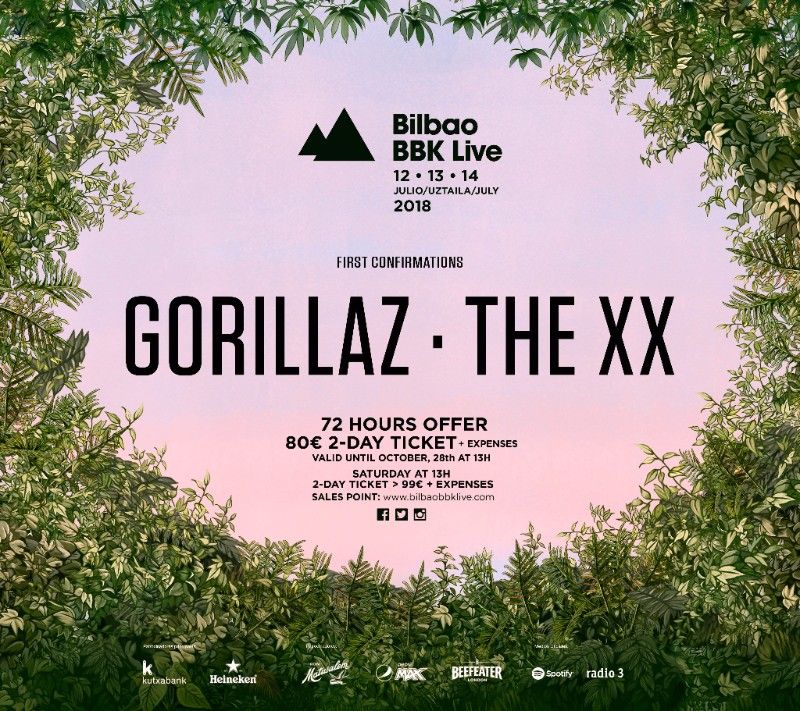 Bilbao BBK Live unveils the festival’s first two headliners for 2018: the acclaimed The xx and Gorillaz. Taking place on Bilbao’s Kobetamendi Mountain in the heart of the Basque Country, the festival is set to welcome thousands of international revellers for a weekend of incredible music from 12-14 July 2018.

The fascinating trajectory of London trio The xx began with the release of their debut album “xx” in 2009 via Young Turks/XL. What followed was a meteoric rise, which saw the band tour the world, headline festivals and be awarded the prestigious Mercury Prize. Since then they’ve produced two further records, including their last album “I See You” (2017) which reached number 1 in the UK and other European countries. Bilbao BBK Live will be an exclusive performance in Spain and Portugal.

Damon Albarn and Jamie Hewlett’s Gorillaz, the world’s most successful virtual band, will return to Bilbao BBK Live in 2018! The group released their much anticipated new album “Humanz” this year which received widespread critical acclaim reaching #1 and #2 in the U.S. and U.K album charts respectively, and topping the iTunes chart in 60 plus countries around the world. On HUMANZ Murdoc, Noodle, Russel and 2D are – as always – joined by an impressive line-up of featured artists including Jehnny Beth (Savages), Danny Brown, Benjamin Clementine, Vince Staples, Popcaan, and Kali Uchis – and sees Gorillaz pushing boundaries once again.

With the festival taking place just moments from the city, there is plenty to explore before the music starts each day. Take a trip into culture-rich Bilbao to wander the winding streets of the old town, devour delicious pintxos, sample the famous michelin-starred Basque gastronomy scene, visit the impressive galleries and museums including the imposing Guggenheim, or soak up some sun on the beach. 3-Day Tickets start from just 80€. Book now at bilbaobbklive.com