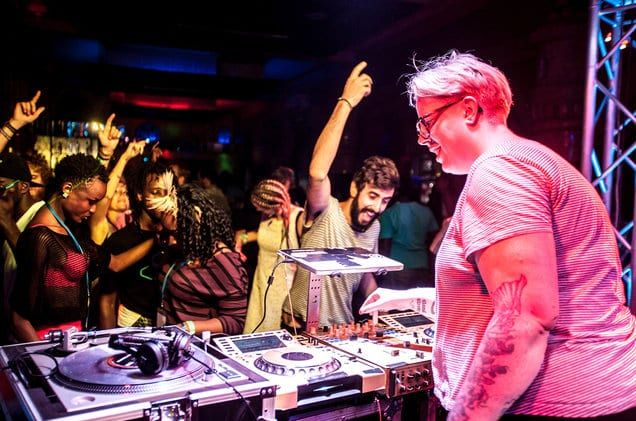 As these shocking statistics show, the music industry is desperately under-representing female talent. Today, on International Women’s Day, and in-line with this year’s official theme #BeBoldForChange, Smirnoff announce their own bold intention to both shine a spotlight on the achievements of women and women-identifying talent in electronic music, and launch an international call to action to escalate gender parity with their ground-breaking “Equalising Music” initiative.

“The electronic music industry has been side-lining female talent for far too long,” said Leila Fataar, Head of Culture & Entertainment at Diageo. "Something needs to be done. With a three-year, multi-million-pound plan in place, we are putting our money where our mouth is. We want to ensure the best talent are headlining, regardless of gender and not influenced by tokenism. We, through the Smirnoff Sound Collective platform, are working with the most forward-thinking people in the industry to figure out the best way forward to enable genuine, long-lasting change.”

Acknowledging the complexities of this deep-rooted issue, Smirnoff has adopted a long-term approach to ensure genuinely effective solutions, working to a three-year strategy and a multi-million-pound budget. Using their influence to enlist talent and organisations who are not only recognised for their credibility in electronic music, but also for championing this cause independently, Smirnoff’s first step has been to secure a pledge from these leading gatekeepers best placed to help fight the cause for gender parity.

In the UK, Smirnoff is proud to announce leading artists and industry gatekeepers The Black Madonna, Live Nation, Spotify, fabric, NTS, Broadly, Thump, Point Blank Music School, Mixmag, shesaid.so and Deltic have each pledged their involvement to launch the initiative, with a unique series of performances, broadcasts and events on and around International Women's Day:

1) EQUALISING MUSIC DOCUMENTARY: Smirnoff will release the fourth instalment of its “Tribes” documentary series, entitled “Equalizing Music”, on International Women’s Day. This documentary highlights the challenges that women face in the industry; sharing stories of success from Chicago’s The Black Madonna, aka Marea Stamper, and Kampala, Uganda’s DJ Rachael, to amplify the voices of women everywhere.

2) SMIRNOFF TOP 50 LIST: Together with Smirnoff, leading publications THUMP and Broadly have curated a global list of today’s most influential, female-identifying, electronic music headliners. The “Smirnoff Top 50 Women Making Noise” list includes artists from Nigeria to Australia, while Annie Mac, Mary Anne Hobbes, Éclair Fifi, HAAi, Jane Fitz, Moxie and more represent the UK. Further expanding the global exposure of these artists, Spotify will curate a unique playlist, entitled "Smirnoff's Top 50", which will feature music from these artists on a platform that fans will be actively encouraged to stream and share.

3) LIVE NATION ROUNDTABLE: Together with Smirnoff, leading international live and festival promoter Live Nation will host a round-table with all the other Equalising Music pledge partners, utilising the collective  knowledge, experience, reach and power of these industry leaders to action truly effective change over the next three years.

4) NTS RADIO: On International Women's Day, NTS will broadcast an entire day’s worth of programming to promote and celebrate women in music. The take-over, in association with Smirnoff, will feature eight hours of music and conversation from leading female talent, including The Black Madonna, Moxie, Eclair Fifi, Miss Honey Dijon, Tropic of Cancer, Octo Octa, Debonair, Kim & Pia, Sofie and more.

“Of course we’re in support of the Smirnoff pledge,” says Marisa Brickman, Commercial Director of NTS. “More than one third of our hosts are female and we pride ourselves on being diverse."

5) FABRIC WORKSHOPS:  Smirnoff is also partnering with UK clubbing institution fabric to empower aspiring female talent through a series of free workshops, held in April at the iconic space in London.  Announced next week and held in April, the three workshops are designed to educate and create opportunities for women starting out in electronic music – tackling the diversity problem at a grass-roots level.  With contribution from Point Blank Music School, shesaid.so, fabric, the Smirnoff Top 50 artists and a host of successful female agents, talent managers, publicists and more – attendees will learn not only how to make music, but also how release and market their music, get booked, understand contracts, build relationships and generally navigate the industry.

"At fabric we pride ourselves on equality and are partnering with Smirnoff to increase the supply of women across all elements of nightlife culture” said Kirsti Weir, Communications & Project Manager at fabric. “From the DJ booth to the boardroom, our workshops at fabric will open doors for aspiring female talent looking to cross the gender divide."