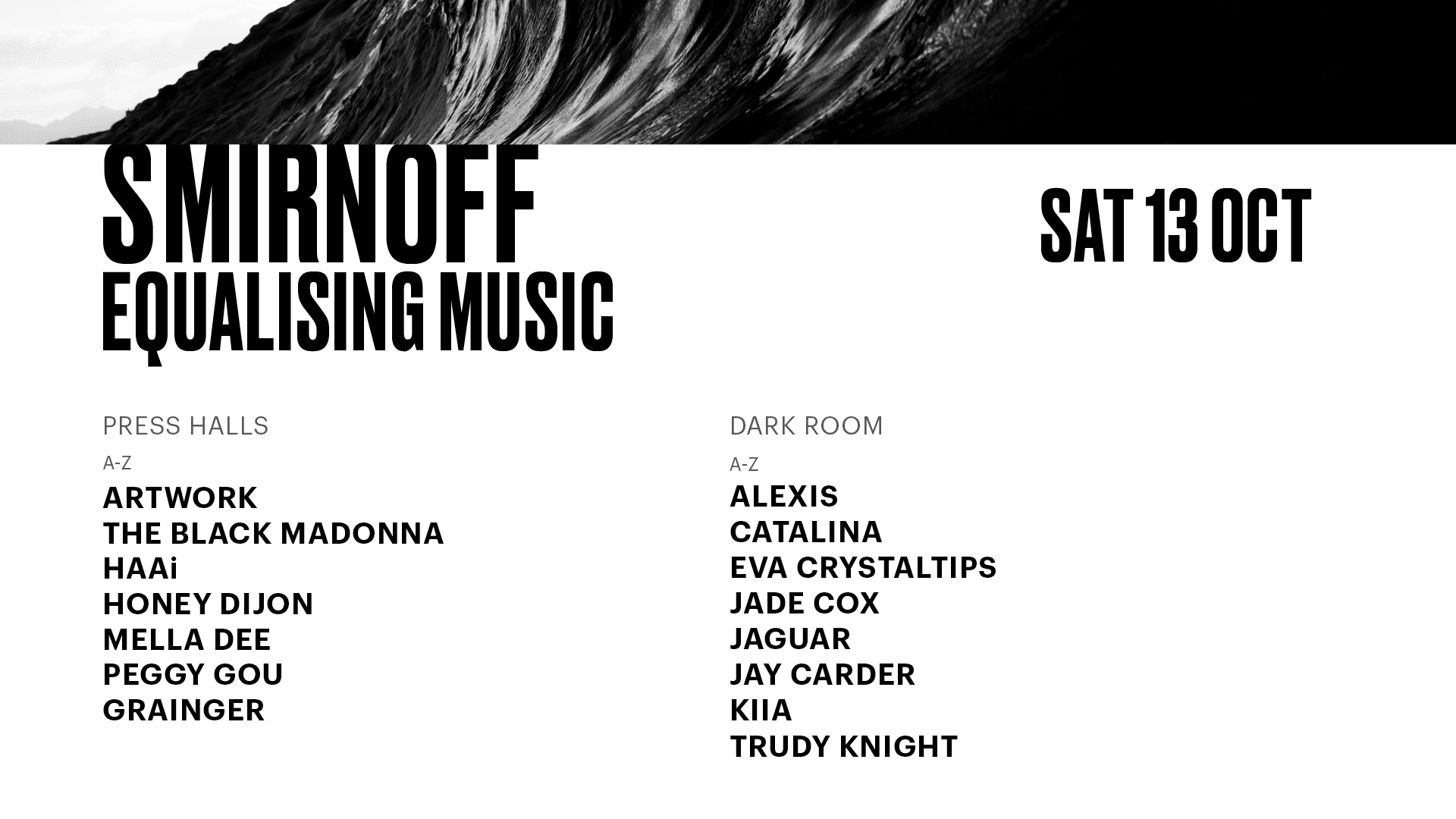 Working in partnership with Smirnoff Equalising Music, Printworks more than doubles the number of female artists performing at the iconic club space in 2018

To round off an incredible year of Equalising Music, Smirnoff will host a one-day event, ‘Smirnoff Equalising Music Presents’ at Printworks London. Taking place on Saturday 13th October, the event will feature performances from artists including The Black Madonna, Honey Dijon, Peggy Gou and Artwork.

Launched in 2017, Smirnoff Equalising Music is a three-year, global initiative to escalate gender parity in the music industry by 2020 and redress the gender imbalance on club and festival lineups. We all know the disparity is real – FACTS, a bi-annual study of festival lineups by Female:Pressure, showed that in 2017 women still only accounted for 19% of festival headliners. Smirnoff Equalising Music is an initiative designed to effect real, top-down, industry-wide change.

Throughout 2018, Smirnoff has been working in close partnership with media and entertainment groupGlobal to double the number of female/female-identifying artists performing at their festivals and events by 2020. Snowbombing, Lost Village and Printworks are all on course to hit that target and deliver an increase of 119%, 158% and 118% respectively. The campaign has also been championed across Global’s Capital and Capital Xtra channels.

"Smirnoff stands for inclusive good times and we are proud to be partnering with Global to champion diversity in their programming and shine a spotlight on female and female-identifying talent in electronic music. We want to ensure the best talent are headlining clubs and festivals, regardless of gender, so it's encouraging to see the progress made by these events so far and we look forward to seeing how this continues as we carry on our work to escalate gender-parity in the industry and enable genuine, long-lasting change."  Sam Salameh, Head of Smirnoff

One reason often cited for the gender imbalance on club and festival lineups, is the smaller pool of female talent to choose from, something the Smirnoff Equalising Music initiative is also tackling through a new DJ mentorship programme launched this year with Global. Designed to break down barriers for women in electronic music and inspire the next generation of female talent, the programme sees internationally renowned DJs The Black Madonna, Artwork, Honey Dijon, Peggy Gou and Nastia mentoring 10 talented aspiring DJs, hand-selected from hundreds of entrants.

Today, Smirnoff is proud to announce that the winners of the Smirnoff Equalising Music mentorship programme, will also be given the unique, money-can’t-buy opportunity to put what they’ve learned into practice and perform at one of the UK’s most prestigious venues.

"Printworks would not be Printworks without London, and its incredible mix of people, cultures and influences. Making sure that Printworks is a place which is open to everyone, representing the absolute best in talent and creativity across the board, is something that we are built upon. Gender parity is a crucial part of this, and in Smirnoff Equalising Music, we have found the perfect partner." – Bradley Thompson, Printworks MD

ABOUT SMIRNOFF
The SMIRNOFF brand, the world's number-one selling premium spirit and the top-selling vodka by volume and traces its heritage back to 19th century Russia. As the most awarded vodka brand in the world, SMIRNOFF has always been known for quality and is enjoyed responsibly in 130 countries around the world. For more information, log on to www.smirnoff.com.

ABOUT DIAGEO
Diageo is a global leader in beverage alcohol with an outstanding collection of brands including Johnnie Walker, Crown Royal, Bulleit and Buchanan’s whiskies, SMIRNOFF, Cîroc and Ketel One vodkas, Captain Morgan, Baileys, Don Julio, Tanqueray and Guinness.

Diageo is listed on both the New York Stock Exchange (DEO) and the London Stock Exchange (DGE) and our products are sold in more than 180 countries around the world. For more information about Diageo, our people, our brands, and performance, visit us at www.diageo.com.