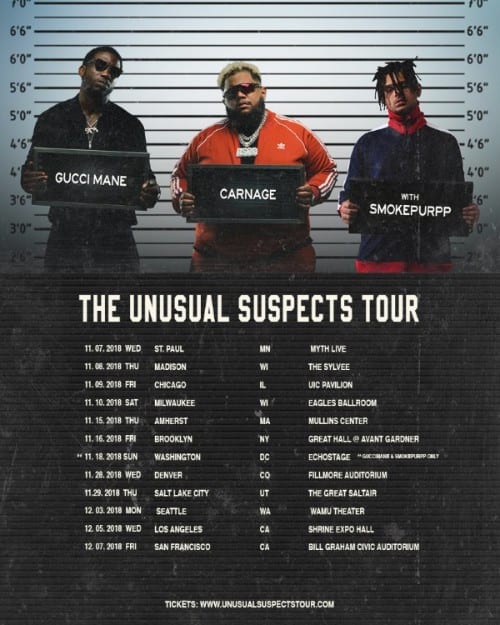 Atlantic recording artist Gucci Mane and international DJ/producer Carnage have announced plans for a major North American co-headlining tour. The Unusual Suspects Tour – with support from Florida rapper Smokepurpp – which gets underway on November 7th at Myth Live in St. Paul, Minnesota, and comes to an end on December 7th in San Francisco at the historic Bill Graham Civic Auditorium.  Tickets for all dates of The Unusual Suspects Tour go on sale to the general public beginning Friday, September 28th at 10am (local).

The name and artwork for the tour, inspired by the 1995 neo-noir mystery film The Usual Suspects, offers a unique package to audiences across the US, bringing 2 of the biggest power players in hip hop and electronic music together on one stage. Add Smokepurpp, one of the fastest rising rappers out of the budding South Florida hip hop scene and part of the 2018 XXL freshman class, the Unusual Suspects Tour delivers the greatest trick the devil ever pulled, delivering one of the most anticipated live shows in the fall. For more info and tickets, visit – www.unusualsuspectstour.com/

The Unusual Suspects Tour follows Gucci Mane’s latest single release, “Wake Up In The Sky”, alongside Bruno Mars and Kodak Black, available now for streaming and download. Produced byBruno Mars, DY, Tre and Tarentino, “Wake Up In The Sky” comes hot on the heels of two other recent track releases, “Kept Back (Feat. Lil Pump)” and “Solitaire (Feat. Migos & Lil Yachty)”, both of which will be featured on Gucci Mane’s hugely anticipated new studio album, EVIL GENIUS, slated for release later this year. Additionally, Gucci Mane will wrap up another incredible year with a “Gucci Mane & Friends” holiday homecoming event, featuring a stacked lineup of special guests and is set forDecember 27th at the Fox Theater in Atlanta, Georgia. Tickets for “Gucci Mane & Friends” go on sale to the general public on Saturday, September 29th and 10am EST.

The Unusual Suspects Tour will be traveling all over North America over the span of one month. With shows at various historic and notable venues across the country, the tour includes stops at Avant Gardner in Brooklyn, the WAMU Theatre in Seattle, UIC Pavilion in Chicago, The Great Saltair in Salt Lake City, and the Shrine Expo Hall in Los Angeles.

W/SUPPORT FROM SMOKEPURPP EXCEPT * AND †