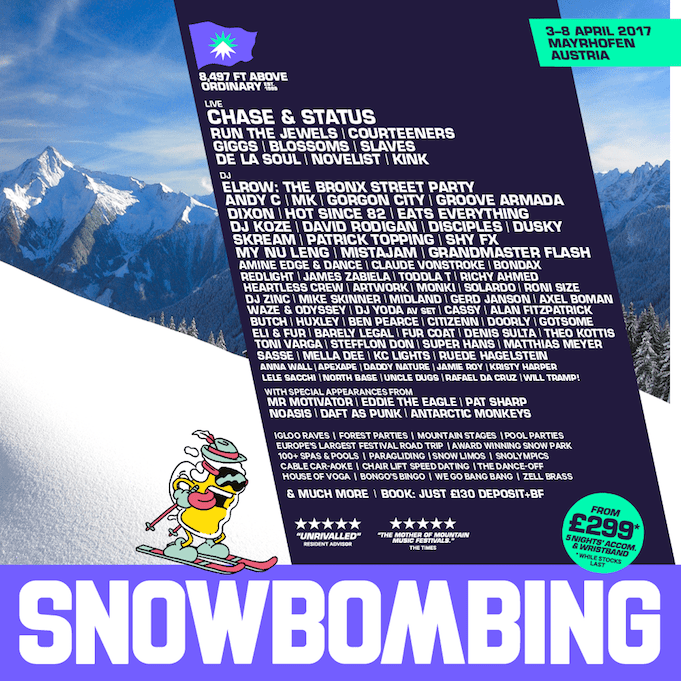 Snowbombing – winner of ‘Best Small Festival’ at last night’s European Festival Awards in Groningen – unveils the final wave of acts set to join a whole host of world-class musical talent in ‘the party capital of the Alps’, from 3-8 April 2017. With just under three months to go until the 18th edition of the festival takes over the alpine village of Mayrhofen once more, the theme for this year’s Snowbombing Road Trip is also revealed, with Europe’s biggest festival car rally set to bring the Freakadelic Circus to the mountains!

Snowbombing royalty returns to the ‘hof as Drum & Bass pioneer Andy C joins the bill for SB17! The award-winning DJ, producer and founder of the influential Ram Records is a serial Snowbomber, guaranteed to deliver another standout set to the Mayrhofen masses as he takes over the Racket Club once more, ready to test its monstrous sound system with a raucous selection of DnB anthems.

Snowbombing are also excited to be announcing a partnership with UKF for SB17, kicking off on the 11th February with a massive Snowbombing x UKF launch party at Printworks – London’s new 5000 capacity music and arts space – featuring Sub Focus, Netsky, Friction & many more, and followed by a monstrous UKF stage takeover at Snowbombing, with line-up details coming shortly.

THE SNOWBOMBING ROAD TRIP BRINGS THE FREAKADELIC CIRCUS TO THE MOUNTAINS!

Roll up, roll up! Hans Von Hofen's Freakadelic Circus invites bearded ladies, hair-raising acrobats, animal tricksters, mind-bending contortionists, devious ringmasters and all manner of circus freaks to join this year’s Snowbombing Road Trip. The travelling freak show of over 150 cars and 500 ‘car-noisseurs’ will hit the open road on the trip of a lifetime, journeying across four countries as they join the greatest two-day festival car rally across Europe. Expect ridiculous pit stops, a fantastically funny ferry ride, road-trip raves, a Saturday night stopover featuring The Dance-Off and Bongo's Bingo, all finishing with a hero's reception as the parade rolls into the Mayrhofen, just as the parties spring into action with appearances from acts including Novelist, Mistajam, Mike Skinner, Doorly, Waze & Odyssey, Huxley and Theo Kottis.

With a stunning journey across the beautiful landscapes of Europe, countless parties and an abundance of free food, drinks and madcap revelry, the Snowbombing Road Trip is a truly once-in-a-lifetime experience. The adventure includes return ferry tickets, departure breakfast and send-off party, Pit Stop Party access on Saturday’s stop-over complete with complimentary food, drinks and guest DJ sets, guaranteed ticket to the Road Trip welcome parade, entry into the awards ceremony with welcome drinks as well and much, much more. So gather your troops, curl up those moustaches, join an acrobatic workshop and fire up those engines, as Hans' Freakadelic Circus prepares to hit the road!

New for this year’s ‘Craft of Daft’ is Pat Sharp’s Fun Haus, a brand new star-lit Bavarian bier garden hosted by TV legend and all things retro-pop, Pat Sharp. Take a trip down memory lane as the Haus bands Noasis, Daft as Punk and Antarctic Monkeys play the classics in a homage to the 90s. Party with Peep Show’s Super Hans, strike a pose with House of Voga, hit the right notes at Bang Bang’s Disco Nights, and join winter Olympics hero Eddie The Eagle for an Official Film Screening and Q&A. With all this plus Bongo's Bingo, the Ping Pong Champs and lots more, there’s entertainment and laughs aplenty in Pat’s Alpine Haus of Fun.