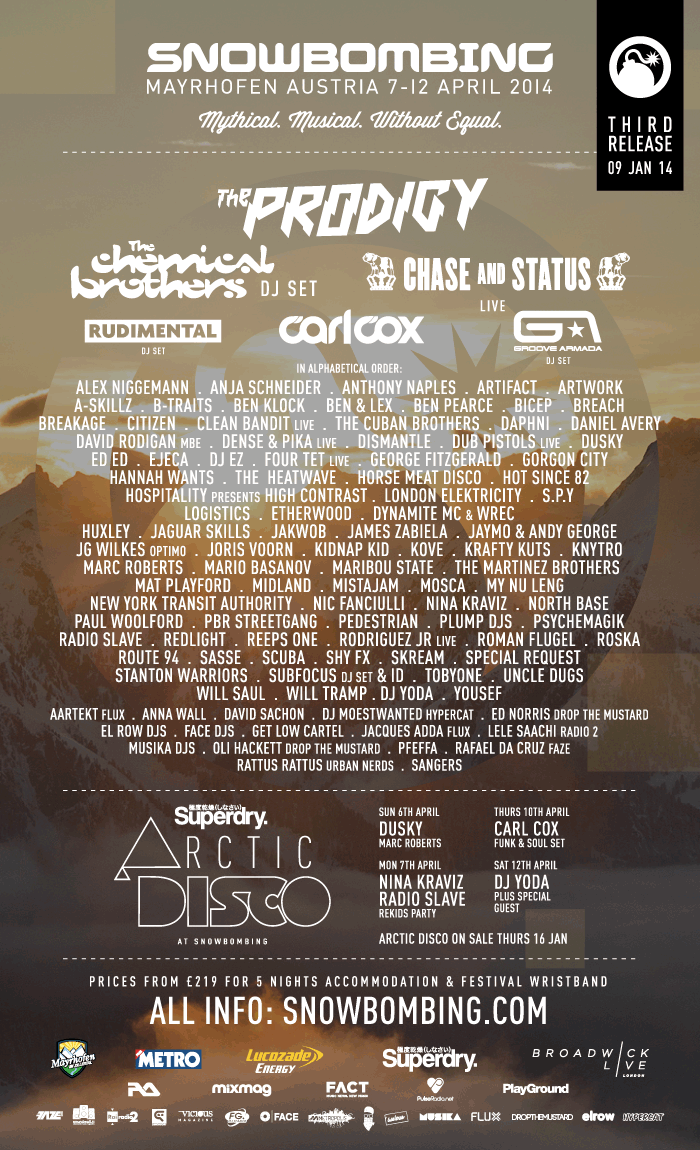 Snowbombing has just released another flurry of acts to keep the January blues at bay! They have also announced that the legendary clothing brand Superdry will be hosting the iconic Superdry Arctic Disco, full party line ups revealed today.

Rejected label boss Joris Voorn will be heading over from his hometown of Amsterdam to showcase his delectable brand of Detroit techno inspired house.

It wouldn’t be Snowbombing without The Cuban Brothers. The trio will be back, mankinis and all, to entertain bombers with their wacky dancing, singing and all round crazy escapades. Just don’t stand too close to the stage!

DJ Yoda will return to Snowbombing to scratch and mix his individual style of hip hop, masked crusader Jaguar Skills will bring his bassy treats back to the mountains and break bad boys Plump DJs will also join the party.

A live performance from art-pop hot shots Clean Bandit adds a contemporary twist whilst champion beat boxer Reeps One will be making his Snowbombing debut.

Manchester main stay and friend of the festival, Will Tramp will drop by for another indie-disco masterclass whilst on the other end of the spectrum, Junglist King Uncle Dugs gets ready to cause an avalanche with his legendary dubplates.

Snowbombing is proud to announce that British fashion lifestyle brand Superdry is the official clothing partner of Snowbombing and sponsor of one of Snowbombing’s most iconic venues – the Arctic Disco.

Not only will Superdry be hosting the infamous igloo parties but they will also be delivering daily video highlight packages from Snowbombing.
To excite and engage with the consumer, Superdry is embracing their après-ski clothing ahead of launching their snow apparel.

Tickets for the Superdry Arctic Disco will go on sale on Thursday 16th January. Giving you the chance to party at the top of the world with nothing but the sky and the stars above you…Take your pick from the choices below:

Sunday 6th April welcomes Dusky to the mountain. After making their first release on Anjuadeep in 2011, the duo have risen to fame quicker than Eddie the Eagle down a black run. They will be joined by Snowbombing’s great uncle and supreme booker Marc Roberts

On Monday 7th April, Rekids soldiers Nina Kraviz and Radio Slave will deliver an unforgettable house and techno party that will guarantee to get so hot it might actually melt the igloo.

Thursday 10th April brings you the legendary Carl Cox (Funk & Soul) who will be performing a very special funk and soul set. This once in a lifetime experience is not to be missed!

To finish off the festival, on Saturday 12th April with an almighty bang, DJ Yoda will take to the icy decks to entertain with his special blend of hip hop.

The Superdry Arctic Disco tickets are priced at £44 per session and will be available at http://www.snowbombing.com/venues/arctic-disco

Days are spent on the slopes, enjoying music on mountain top stages or relaxing in the spa of a 5* Hotel and nights deliver cutting edge performances from world class acts in unique venues.