Afro Bros - So Much Love 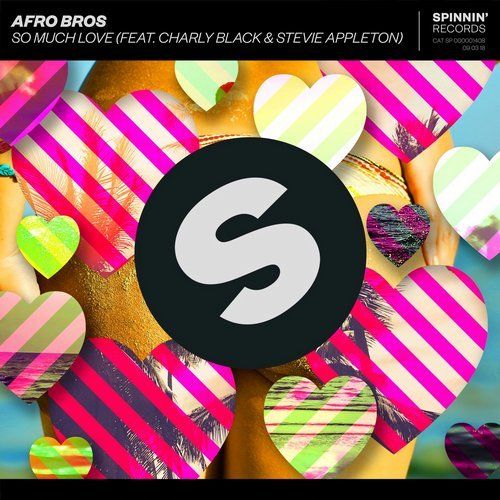 Afro Bros - So Much Love

Dutch DJ/producer duo Afro Bros presents its most promising single to date, 'So Much Love', featuring legendary Jamaican artist Charly Black and upcoming UK singer-songwriter Stevie Appleton on vocal duty. It's resulted in a hot blooded piece of dancehall blended with an infectious reggae vibe, turning the tune into a sunny, heart warming piece of pop music, out now on Spinnin' Records.

Afro Bros (aka Dutch DJ/producers Rashid Badloe and Giordano Ashruf) kicked off its DJ career around 2006. The duo made itself known with a fresh mix of latin house, afro house, moombahton, and urban, while playing some of the most well known clubs and festivals in Europe.

Producing their own records meant a new chapter in the guys' career, scoring their first commercial success in 2010 with 'Dubbelfriss', followed by more singles, remixes and bootlegs. This resulted in millions of worldwide streams and downloads, including support from artists like Major Lazer, Diplo, DJ Chuckie, DJ Snake, Hardwell and Carnage, while the duo itself started performing internationally, touring from Europe and Africa to Asia and South America.

After five years touring, the Afro Bros decided to bring something new and released '18+', an urban song with extremely catchy chords, resulting in a global hit tune. By now, the official video is counting over 13 million views, while the track counts over 7 million Spotify streams.

Following this success, the Afro Bros were signed with renowned music label Spinnin' Records, where they released an exciting Spanish version of '18+' featuring Ghetto Flow, and the popular club tune 'Tragiton', which received support from DJs like Diplo, Carnage, Mastiksoul, DJ Snake and Gregor Salto.

More recently, early March saw the new single 'X' by Nicky Jam and J Balvin, produced by Afro Bros, turn into an overnight massive hit, scoring over 50 million YouTube views within three days (currently counting over 95 million views). Nuff said, these guys are on fire, making the anticipation around their next project even bigger…

Which doesn't take long, as the guys now return with 'So Much Love', a record that builds on the addictive 'Tragiton' rhythm, adding a catchy reggae/pop arrangement that takes the song to exciting new heights. On vocal duty alongside UK singer-songwriter Stevie Appleton, one of the UK's most promising upcoming artists is the esteemed Jamaican vocalist Charly Black, whose vocal chops seem to be the missing link of what could very well become one of this year's undeniable summer hits.

"The original beat was 'Tragiton', released on Spinnin' Records, but after that the track got a life of its own! First, we met Stevie Appleton in the studio, and he brought some crazy summer vibes inspiration to the game. Next thing we know, Charly Black recorded some sick vocals on it, and we had ourselves a brand new record, very fresh, very sunny! It's a wonderful road this record has traveled, and we hope 'So Much Love' gives you the same good vibes as it gave us!" – Afro Bros