Today SOFI TUKKER shares the music video for their single “House Arrest” with Gorgon City. The track currently sits at #10 on the US Dance Airplay chart and has over 6 million Spotify streams. The music video, directed by SOFI TUKKER & The Freak Fam with animation by London agency Ombra Design, features clips from SOFI TUKKER’s daily livestream DJ sets and fans around the world dancing to “House Arrest” at home.

SOFI TUKKER shares about the video: “Over the past 118 days, a community has built around our daily DJ sets. The dedication and love that people are sharing with each other in this really unprecedented time in history has been blowing our minds. It’s become a place that a lot of people, including ourselves, rely on to get through the uncertainty of it all. They call themselves the freak fam and we directed this video together.”

In addition, SOFI TUKKER shares three remixes of their single “Good Time Girl” feat. Charlie Barker. Originally released on their debut 2018 album Treehouse, icy house tune found a second life when it was chosen as the official theme song of HBO’s The New Pope starring Jude Law and John Malkovich. Since then, “Good Time Girl” has been lighting up Shazam and iTunes charts across the globe, garnering over 10 million streams.

“The original was a banger,” Benassi says of “Good Time Girl.” “I just felt the need to make it slightly more aggressive to get a club version. I had a great time working on the bass and the drum set with my team. I love the track and above all, I love SOFI TUKKER. I somehow feel like I’m their older brother.”

The two additional remixes come from Italian-Brazilian producer Leandro Da Silva, who gives the song a cosmic bump, and Canadian duo BYNON, who puts a more progressive house spin on the original.

SOFI TUKKER have been broadcasting live DJ sets at 6PM BST / 7PM CET on their Instagram, Facebook, and Twitch channels to stay connected with their community of fans around the world. The improvisational nature of these sessions make each one singular as the group incorporates live samples, guitar, and vocals into the sets. The group has also shared a Spotify playlist with highlights from their daily sets. The duo recently celebrated their 100th consecutive livestream with a wildly fun 100 minute set where they switched clothes and impersonated each other. 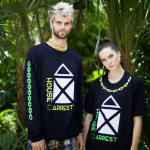