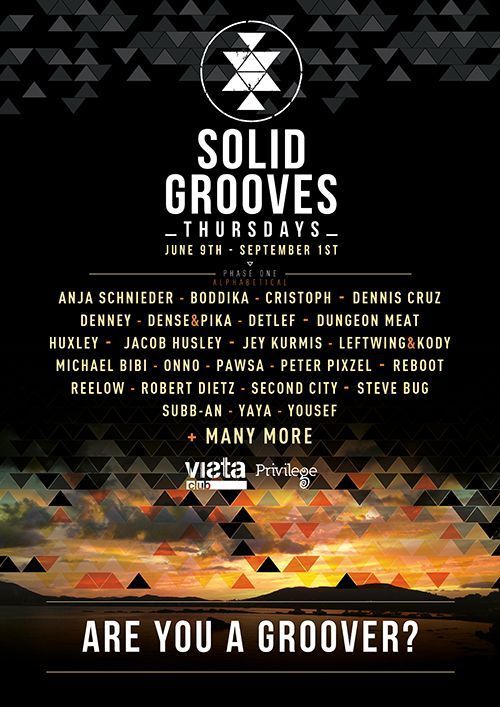 SolidGrooves can now proudly reveal the first wave of artists that will be helping them set a new benchmark for partying in Ibiza this summer season. The first of the weekly events takes place on June 9th and kick starts what is sure to be an amazing season. That season runs right through to September 1st, when the fun must sadly stop with a big final blow out. In between those dates, international tastemakers and underground stars from Boddika to Reboot, Subb-An to Dense & Pika, Dungeon Meat to Robert Dietz to Anja Schneider will all line up with a fine team of residents and more than a couple of top secret guests and special back to back sets also being added.

The venue for this is Vista Privilege, a breathtaking space known for being like no other in Ibiza: it boasts big glass windows and unique views of the White Isle so that when the sun beams through them as night turns to day, it is one of clubbing’s finest experiences. Add in to that the fact it is a cosy mid sized space for up close and personal partying, with a crisp and punchy Funktion One soundsystem and exposed industrial structures, and you have a perfect recipe for many magical musical memories this summer.

Starting off the mouthwatering SolidGrooves season is a big opening event with a very special secret guest. As well as that treat, there will be sets from the UK’s One Records house hero Subb-An, Hypercolour and Aus's hit making house, bass and garage star Huxley, plus VIVa and Moon Harbour main man Detlef and residents Dennis Cruz, PAWSA and founder Michael Bibi. It promises to be an excitable party that covers lots of musical ground with plenty of on point production and party people all making for a truly vibe fuelled atmosphere.

The other weekly events during the hottest months of the year will be headlined by a carefully chosen selection of house and tech stars from across the world. These will include label bosses like Exit’s pioneering bass man Boddika, Lost Records pair Leftwing & Kody, Hot Flush’s techno titans Dense & Pika, Aus and Hypercolour hit maker Huxley, Back to Basics resident Tristan da Cunha and deep house legend Brawther aka hardcore house pair Dungeon Meat as well as infectious loop masters from Cadenza such as Reboot and Robert Dietz.

Young names such as Hot Creations jewel Denny and VIVa aligned tastemaker Detlef will also line up, as will fabric night WetYourSelf’s main men Jacob Husley and Peter Pixzel, plus Solid Grooves founder and expert resident spinner Michael Bibi. There will be more names to come soon, but for now Reelow, Yaya, Mexican in London ONNO, regular guest PAWSA, Jey Kurmis, Circus ringleader and tech house stalwart Yousef as well as the much loved One Records affiliate Subb-An complete the first wave of acts for 2016.

The whole sensational season comes to a spectacular close on September 1st with secret b2b headline guests as well as some leading label boss talent from Berlin, cult figures from the UK and more besides. All in all it is shaping up to be a remarkable and refreshing series for lovers of proper house and techno.

First wave of announced artists performing over the summer