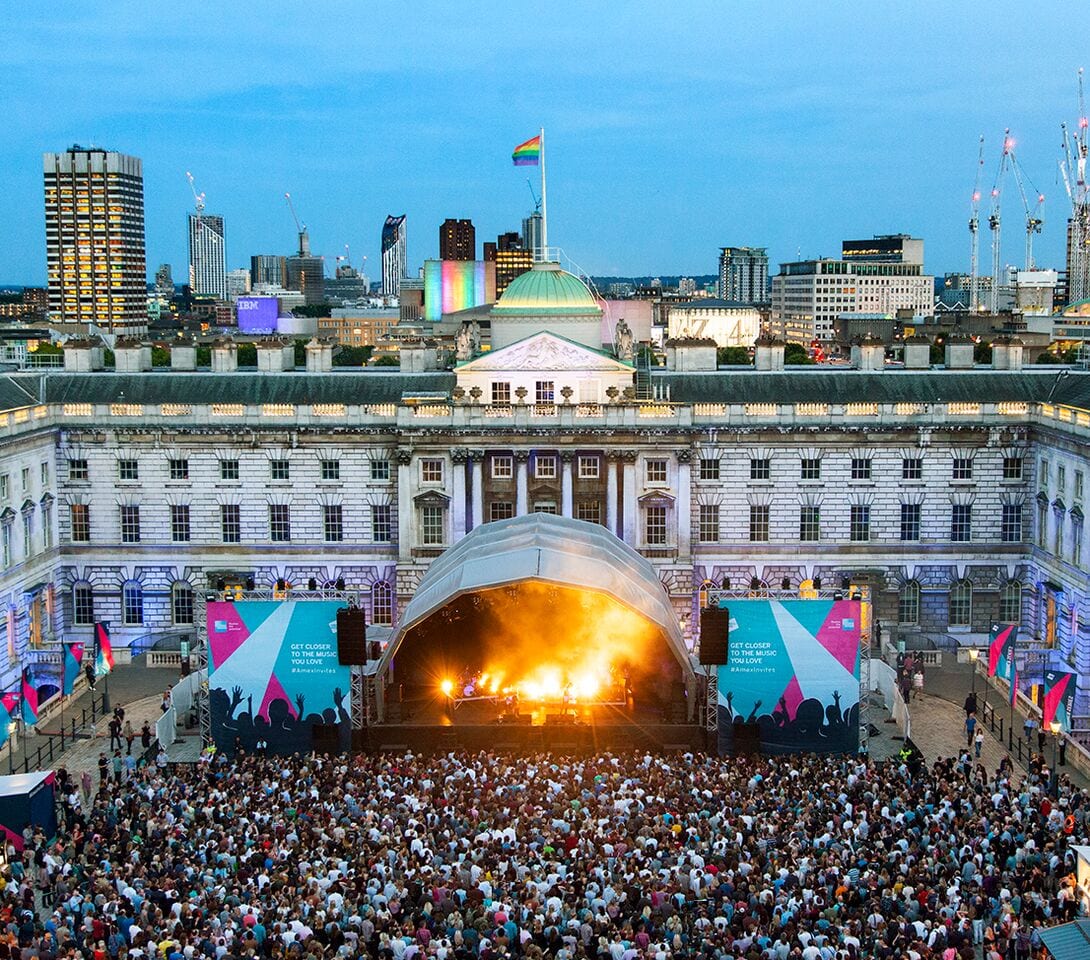 One of the undisputed highlights of the UK’s festival season, Somerset House Summer Series with American Express returns to London from 5 to 15 July 2018. As ever, the Summer Series offers music fans the chance to see both internationally renowned and critically lauded up and coming artists playing in one of the capital’s most remarkable locations – the courtyard of Somerset House.

The bill for the eleven-night festival reflects Somerset House’s commitment to showcasing diverse and dazzling world-class talent, both home-grown and ‘just visiting’ with an incredible line-up that includes acts from the UK, the US, Australia and Norway.

In the 70th anniversary year of the arrival of the SS Empire Windrush, this year’s Summer Series celebrates the influence that music of black origin has had on this country’s culture with massive opening weekend parties thrown by two British DJ legends. David Rodigan joins forces with The Outlook Orchestra to present a stellar line up of special guests for a night of reggae through the years, whilst Don Letts brings the very best in British bass culture from carnival to grime, including DJ sets to get down to and live performances from the likes of Wiley.

The following week salutes the sound of the US scene as two of hip hop’s pioneering acts – The Roots and De La Soul – hit the stage for exclusive London performances.

As ever, the Summer Series continues to champion new and emerging voices with award-winning artists too, as Jorja Smith and Sigrid join the bill to show the capital why the Brits and the BBC tipped them for greatness this year.

In addition to the live music line up, Somerset House will play host to The Influence Project – a new photographic exhibition that digs deep into the roots and influence of modern R&B, Funk, Soul and Afrobeat.

On Saturday 7, filmmaker, DJ and broadcaster Don Letts presents Bass Forward – a night celebrating the very best in British bass culture from carnival to grime. Joining Don on the decks will be Norman Jay MBE and Jazzie B; very special live performances come from Congo Natty and the Godfather of Grime himself, Wiley.

Hot on the heels of their massively acclaimed fourth album Little Dark Age, MGMT bring their inimitable mix of psychedelia and knock-out pop hooks to London on Monday 9, while the following night sees Laura Pergolizzi – aka LP – play songs from her swaggering, effortless, widely lauded debut Lost on You.

Norwegian singer/songwriter, winner of the BBC Sound of 2018 and (according to the Guardian) “the new Lorde” – Sigrid plays her only London festival date this year on Wednesday 11 July.

The following night, Grammy winners and Philadelphia’s finest, The Roots, join the Series for an exclusive performance that embodies the spirit of hip-hop, soul and funk and will no doubt be one of the Series’ highlights.

Praised by Stormzy and Skrillex and sharing vocals on a track with Drake, Jorja Smith has quickly become the UK R&B’s brightest star. Recently winning the acclaimed Brits Choice Award in 2018, she joins the bill to perform songs from her hugely anticipated forthcoming debut album on Friday 13. Thirty years into an unstoppable career, De La Soul continue to inspire with their kaleidoscopic blend of samples and unique mic skills (Saturday 14).

Ireland’s queen of the avant-garde and Mercury Music Prize nominee, Róisín Murphy, will close this year’s Summer Series with her fearlessly original and enthralling music (Sunday 15).

Set on the river right at the heart of London, Somerset House’s reputation as one of London’s leading cultural destinations for must-see exhibitions and outdoor events has grown massively over the last twenty years.2018’s Summer Series programme further establishes the venue’s reputation, offering visitors the unique chance to enjoy some of the most exciting music acts in the world in a truly unforgettable location.

Congolese, London-based photographer Alexis Chabala and producer Lorayne Crawford have captured the characters of both icons and contemporary artists, from George Clinton, Shuggie Otis, Sister Sledge and Candi Staton to Aloe Blacc, Laura Mvula, Hiatus Kaiyote and Robert Glasper all of whom have previously performed as part of Somerset House Summer Series, and The Roots who play this year.

The Influence Project will investigate the connections between these established and emerging pioneers, reaching across time to shape the sound that we hear today. Portraits will be accompanied by quotes and details from artists who have been influenced by them, highlighting the history and the significance of their music throughout the generations.

The show will also include a new film featuring artists talking candidly on camera about their inspirations and a unique soundtrack will fill the gallery floor.