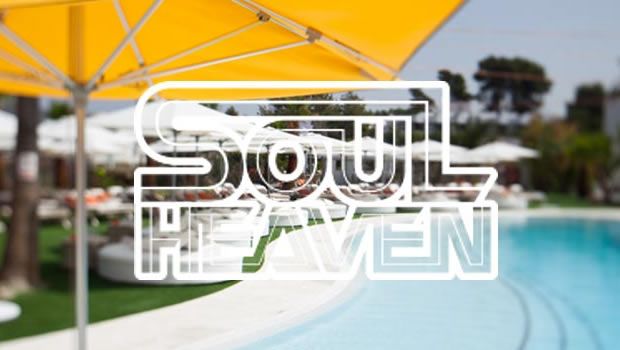 Always on the innovative party curve, International party group, Soul Heaven return for their second Ibiza summer season of their hot weekly pool parties from midday on Saturday May 31st until September 27th in the beautiful surroundings of the Ocean Beach club. Relaxing on beach beds, cooling off in the pool or enjoying cocktails as you listen to soulful tunes on a perfect balearic afternoon, Soul Heaven is what Saturday afternoons and evenings in Ibiza were made for. Is day time the new night time?

Playing the freshest sounds and cutting edge music to a switched on party crowd from around the world, Soul Heaven showcases house music in its widest definition with a celebrated ‘Best of British’ line up that features icons of dance music in the shape of Norman Jay MBE , Joey Negro, and Grant Nelson. If you can’t make it out to Ibiza this summer then tune into the sounds of Soul Heaven broadcasting every two weeks starting with Norman Jay on June 7th on the island’s award-winning Sonica Radio http://www.ibizasonica.com/.

Leading the Brit pack is the FIRST British DJ to be awarded an MBE on merit for “deejaying and services to music” and one of the A Lister’s most celebrated DJs,  Norman Jay, who is Soul Heaven’s monthly resident DJ. UK production wizard and crate digger extraordinaire, Joey Negro, pops up most months across the summer too, having recently celebrated Record Day with his ‘Remixed With Love’ vinyl release. Housecall Radio show king and celebrated producer/DJ Grant Nelson joins the party alongside Soul Heaven A&R chief, DJ Sy Sez, introducing the label’s hot new Exclusives and Vocal Booth Weekender head honcho and DJ Andy Ward.

One of the house music’s most flamboyant characters, the enigmatic Sandy Rivera, launches this year’s Soul Heaven summer season on Saturday May 31st. His seminal track, ‘Finally’ is one of the white isle’s most revered and played classics, and with new mixes of  ‘I Can’t Stop’ 2014, comes an aptly titled new single ‘Bang’ with longtime collaborator April, which re-launches Sandy’s seminal label, Deep Vision, who are also set to feature a hot collaboration between Sandy and another island favourite, the S-Man aka Roger Sanchez.

Last but not least Holland’s Risk Sound System trio complete the Soul Heaven line up and with Masters At Work’s Kenny ‘Dope’Gonzalez doing a LIve Radio broadcast from Soul Heaven on Sonica Radio Saturday August 20th ahead of the release of the ‘Ocean Beach Ibiza – the debut’ CD, compiled & mixed by Kenny and OC resident, Tom Crane, Soul Heaven’s second season leads the way in daytime parties with its ‘good times’ musical soundtrack and hedonistic style. ‘The deejay’s DJ’, Norman Jay headlines the Soul Heaven Closing Party on Saturday September 27th playing more of his upfront disco fuelled funky house grooves,
Last year’s inaugural season attracted a loyal and fun-loving poolside following, and became a Saturday afternoon staple to get clubbers in the mood for the weekend with its sun-kissed musical soundtrack and relaxed party atmosphere. Soul Heaven’s pop up Pool Party at Ocean Beach oozes class and cool in equal measures, and one of The Things To Do if you’re on the island this summer.

A breath of Ibizan fresh air, Soul Heaven invite you to join them for their very cool Saturday pool parties at Ocean Beach this summer.