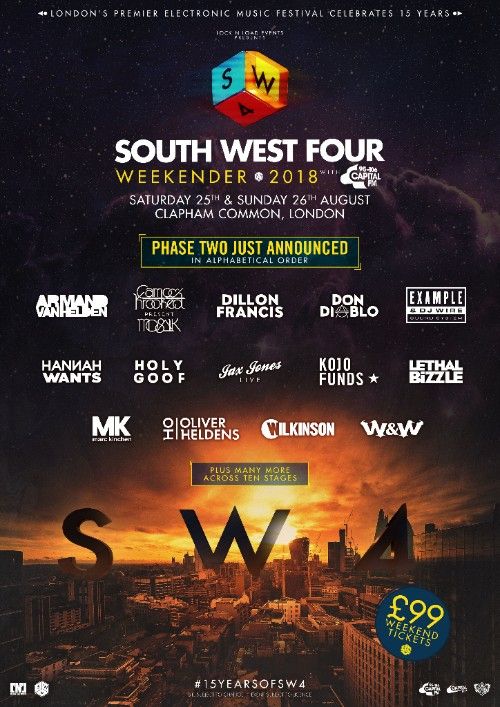 Ramping up their preparations for South West Four’s 15th anniversary edition on Saturday 25th and Sunday 26th August, the organisers of London’s leading electronic music festival have declared the latest batch of dance music titans for the 2018 edition.

He’ll be joined by the legendary club hit maker since the 90s, Armand Van Helden as well as future house hero Oliver Heldens plus fellow Dutchman and Hexagon head honcho Don Diablo. Saturday’s schedule also sees ‘Breathe’ producer Jax Jones, who’ll be bringing his LIVE show to a London festival for the very first time. American DJ Dillon Francis, and big-room duo W&W take to the stage, along with London favourite Example, with the British rapper set to be joined by DJ Wire in a typically explosive live performance.

Latest additions for Sunday 26th August include grime star Lethal Bizzle and afro swing rapper Kojo Funds, with SW4 favourite Wilkinson set to blast his high-energy signature sounds to the Clapham crowd. Austrian drum and bass duo Camo & Krooked will present Mosaik Live in what will be a UK festival exclusive. They’ll be joined on Sunday by Holy Goof and Birmingham’s finest bass selector Hannah Wants, with a series of Sunday acts still to be announced.

Amassing a huge back-catalogue of former headliners, including Faithless, Skrillex, The Chemical Brothers, deadmau5, Pendulum (Live), Rudimental, Eric Prydz and Above & Beyond, South West Four started as a backyard party in June 2001 and rapidly grew in number over the next couple of years, moving to Clapham Common in August 2004. As the festival progressed, the crowds increased, and the lineups grew bigger and stronger than ever before. In addition to the impressive list of headline acts, the festival is renowned for boasting a number of carefully curated stage hosts which include the likes ofAmnesia, ANTS, Playaz, and Fatboy Slim’s Smile High Club, with last year witnessing the festival debuts of ‘B Traits Selects’ and Disciples & Danny Howard present ‘The Following & Nothing Else Matters’.

Early bird day tickets have been extended until Friday 2nd Feb with weekend passes at only £99 and selling faster than ever before; South West Four 2018 is looking like the biggest year yet. Further announcements are still to come.