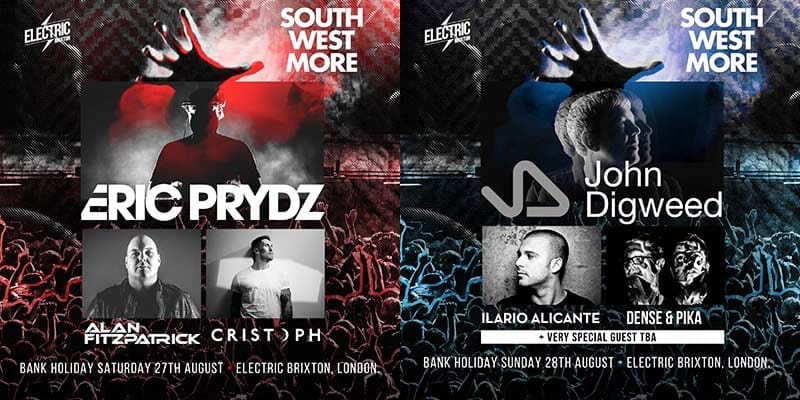 We’re excited to finally reveal details of South West More, the official after parties following the 2-day South West Four festival on Saturday 27th and Sunday 28th August 2016. Taking place at one of the UK’s favourite venues, and just a stone’s throw away from Clapham Common, the brilliant auditorium Electric Brixton will host the all-night parties and continue the madness of the day.

Headlining the hotly anticipated South West More after party on Saturday 27th August will be Eric Prydz performing an exclusive 3-hour DJ set. As one of the world’s favourite electronic artists and DJs, with some of the most diverse musical stylings in the industry, Eric Prydz stunned the crowds with his unbelievable back-to-back performance with deadmau5 after SW4 in 2014 and with Nic Fanciulli in 2015. Although Eric isn’t playing this year’s festival, he will be appearing at SW4 Sunday under his dark and twisted alias, Cirez D. Howver the Pryda records boss has decided to leave his mark at South West More once again with his solid, trademark sounds that we all love him for. As a true SW4 hall of famer, this rare opportunity to witness his brilliance in such an intimate venue is going to be in huge demand.

Having enjoyed a breathlessly successful 2015, there can be no doubting Alan Fitzpatrick’s position as one of the most influential electronic artists of the moment. Pumped up by yet another series of head-turning productions over the previous twelve months, the Englishman’s profile continues to transition rapidly from the techno underground towards the electronic music main stage. Don’t miss his unstoppable performance at South West More.

Completing our fabulous South West More Saturday line-up is one of the scene’s brightest talents, Cristoph. With appearances set to take place across four continents this summer alone, Cristoph is a true original, and one we are excited about catching at our South West More after-party!

This year marks the thirteenth appearance of John Digweed at South West Four, and thanks to his stellar reputation of entertaining our South London crowds in the daytime, we could think of nobody better to headline our South West More Sunday after party.

This DJ and Producer has been grafting hard over the course of his twenty-year career, and it shows, with his sets going down in history as some of the best ever, and his record label, Bedrock going from strength to strength. His mixing skills are so legendary that he has released several mix albums, and he is so in demand that he has been booked everywhere, from Ibiza to Coachella.

Wherever John Digweed goes, he brings the party with him, and we can’t wait for him to get the whole of Brixton moving well into the early hours.

Also appearing at the exclusive South West More after party will be Italian DJ and producer Ilario Alicante. His rise to fame has been meteoric – debuting at Time Warp at the record-breaking age of fifteen, and now having played worldwide and produced records for labels as iconic as Sven Väth’s Cocoon imprint, he might be at the top of his game, but Ilario Alicante shows no signs of slowing down!

Techno duo Dense & Pika do not just make music, but they live it. Touring on a weekly basis means that they’ve played in some of the most legendary venues in the world, from Space in Ibiza to elusive Berlin club Berghain and with London now firmly marked on the map as there next move, their arrival is huge!