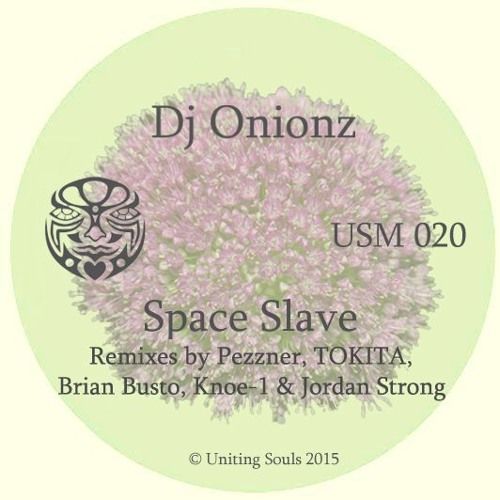 The latest release on respected Seattle house music imprint Uniting Souls features New York house music legend Onionz. Label founder Ramiro goes way back with Onionz, with the two becoming friends in San Francisco during the heyday of the ’90s scene. This EP Is a reunion of sorts, rekindling the creative energies shared between these two house music pioneers for almost two decades.

Onionz’s contribution is the cosmically titled “Space Slave” – perhaps a reference to a certain metal-bikini’d intergalactic princess? – and it’s a sublime excursion into beat-driven deep tech house. The track builds masterfully over its seven minutes, with echoed arpeggiations and groovy rhythmic elements pulsing in and out of the mix. “Space Slave” is then punctuated by the emergence of a moody, psychedelic synth melody at its peak, evoking the feeling of space travel via the dance floor.

The release also unites vibes from coast to coast, with remixers from three different corners of the US. Seattle’s Pezzner opens up proceedings with a haunting feel, displaying his expert combination of beats and atmospheric textures. Pezzner has also supplied a second version of his mix, featuring a subtle shuffle at a slightly speedier tempo. Next up is Los Angeles producer duo Knoe1 and Jordan Strong (a Uniting Souls resident since 1998) delivering a chugging warehouse vibed rework perfectly suited for the after hours. Brian Busto, of Florida’s Serious Soul crew, then turns in a dark-as-night remix of “Space Slave”, filled with throbbing bass, ominous soundscapes, and crisp machine rhythms. The release closes with San Diego’s Jason Tokita whose hypnotic treatment of the track goes deep, and includes some dialogue snippets captured from distant orbit.