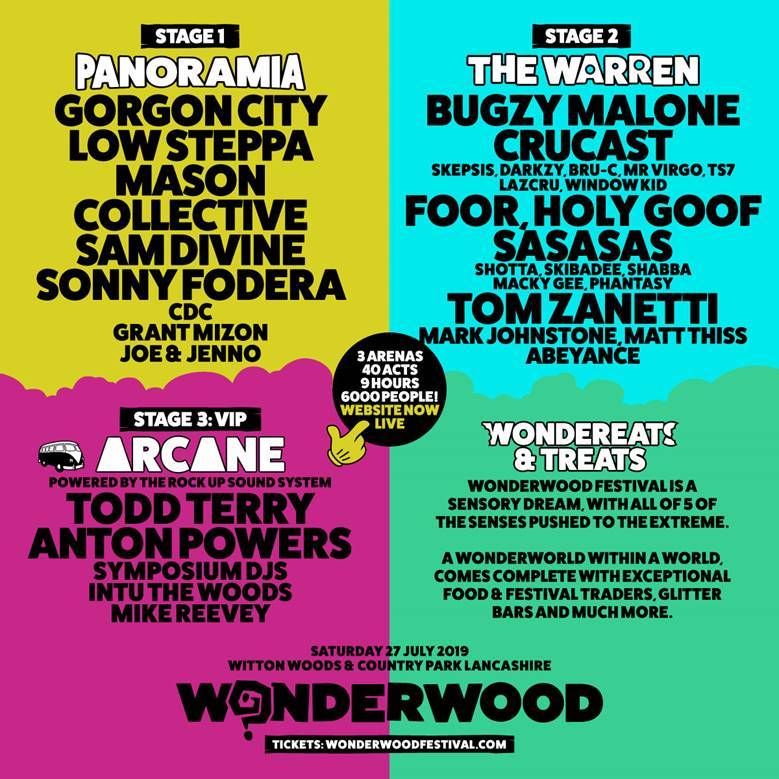 ‘Wonderwood’ the previously announced one-day dance event set to take place on Saturday 27th July at the abandoned forest ofWitton Woods, Blackburn, has revealed the themes and stage splits for its debut event. The fully conceived themes include the picturesque ‘Panoramia’ Main Stage where hit-makers Gorgon City will headline; ‘The Warren’ at Stage Two where amidst the tree-lined labyrinth, grime don Bugzy Malone tops the bill; and the mysterious ‘Arcane’ where VIP guests will dance until sunset and beyond with US house legend Todd Terry at the helm. This boutique festival experience also reveals today the ‘Wondereats’ food world complete with exceptional food and festival traders, glitter bars and much more. Tickets for Wonderwood are still available priced from £32.50 plus booking fee from www.wonderwoodfestival.com.

From the expert team behind the game-changing PierJam and BassJam events, Wonderwood is set to be the perfect escape as it takes revellers into the wild, tangled forest of Witton Country Park. Guests can lose themselves to an incredible soundtrack of house, grime and bass music, safe in the knowledge that the Wonderwood team will bring all their experience and know-how to ensure the production and sound systems will be of the highest order.

Organisers are thrilled to reveal the ‘Panoramia’ theme for the Main Stage. Aptly given this title, the stage sits in a vast clearing flanked by thousand-year old great oak trees that entice the sun’s rays through the hanging foliage and branches. With 360-views of this stunning location, expect explosions of colour, the biggest dance sounds, and thousands of like-minded people to share in the experience.

The ‘Panoramia’ Main Stage split has been released and features some of the biggest contemporary house acts of the new millennia. They include, Gorgon City, Low Steppa, Mason Collective, Sam Divine, Sonny Fodera plus support just announced as CDC, Grant Mizon and Joe & Jenno.

Down treelined corridors, guests will head to ‘The Warren’ (Stage Two) where heavyweight beats, bass, grime and house will fill the tree canopied void for hours upon hours. A canopy of colour and chaos will line the trees above and the floor below as organisers take a DIY ‘lost and found’ ethic to the décor, utilising a madcap variety of brick-a-brack objects and design. For those who like to party on the wild side, ‘The Warren’ is the place to be.

Continuing with the Wonderwood themes, VIP ticket holders can step into their own private party of the ‘Arcane’. Laying in plush surroundings, ‘Arcane’ is a concealed world featuring dedicated VIP bars and toilets, queue-jump, VIP performers, massage, glitter people, VIP seating and relaxation areas. The stage is powered by the ‘rock up sound system’; a solar powered, four wheeled, two up, two down leviathan that will pulsate sounds through the forest at 343 metres per second. Here guests should expect the inexplicable.

The Wonderwood VIP stage is the place for class house acts and the stage split has been revealed as Todd Terry, Anton Powers, Symposium DJs, Intu The Woods and Mike Reevey.

Further creating a festival vibe for this not-to-be-missed summer party, is the Wondereats food world. Here an assortment of mouthwatering global cuisine will cater for a variety of tastes keeping energy levels stocked to let the dancing prevail. Alongside the scrumptious food offerings, here expect more festival traders, glitter bars and much more.

Tickets for Wonderwood are still available priced from £32.50 + bf for standard admission, and from £50 + bf for VIP. All options can be purchased via www.wonderwoodfestival.com.

Wonderwood is shaping up to be a unique, sensory experience. Creating a world within a world, it’s a bonafide alternative to the mainstream summer events out there in 2019, mixing cutting edge sounds and unparalleled production, with an awe-inspiring location and the natural wonderment found in the forest.

To keep up to date with latest Wonderwood news, join the Facebook group www.facebook.com/WonderwoodFest.