Stealth – Homage (Back to You) / Smash It 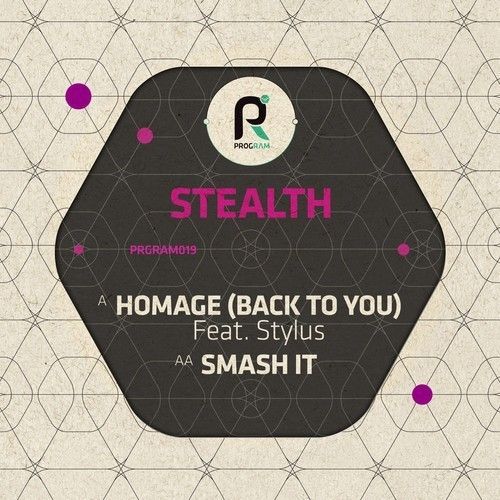 Stealth – Homage (Back to You) / Smash It

Staying true to his name, Stealth has craftily taken centre stage. Every record he’s released oozing with sophistication has repeatedly stolen the spotlight. And this next one is no exception.

The production connoisseur yet again goes for the aural jugular, using ProgRAM as a launch pad. Stealth demonstrates the imprint’s forward thinking movements and command of a genre which often goes unmatched. The relationship has been harmonious; alongside ProgRAM, he’s already made a crater sized impact within the dnb community… And it’s not difficult to see why.

‘Homage’ leads in a tightly fashioned intensity.  Dark, brooding and with plucky percussion, it’s a tribute to the sound Dillinja mastered. An instantly recognisable vocal sample is filtered through the record’s menace, meandering perfectly between the bassline’s thumps which eventually drop us into LFO-lead chaos. Piece by piece the main melody begins to build, throbbing until it completely over-takes the record’s more humanistic elements. Audibly stocky, yet with a dimension that rings true of Stealth’s icy production, it’s a relentless roller with a nasty bite.

Next up, ‘Smash It’ still holds onto the merciless setting of its predecessor, but also offers something completely different. With a bristling rhythm that steps its way into a haunting crescendo, Stealth uses this break to highlight the track’s imposing detail; it trickles, floods and then the dam breaks due to the build up’s audible weight. Progressing deeper into the mix, the track is underpinned by quaking sub bass. An insistent kick and snap of drums merges against steeply elevating note loops, laying out Stealth’s finely combed conundrum of complex yet hard hitting composition.  Both ‘Homage’ and ‘Smash It’ receive the innovative-stamp of approval, playing on more contemporary elements but also delving deep into the 90s, promising both tracks remain timeless.

Stealth is pushing his influence into every corner, with his late night vibes commanding even the hardest of crowds. So, yet again, it’s time to get with the ProgRAM, and succumb to one of the scene’s biggest contenders.