Steve Angello Takes Over NY with Two Shows in One Night 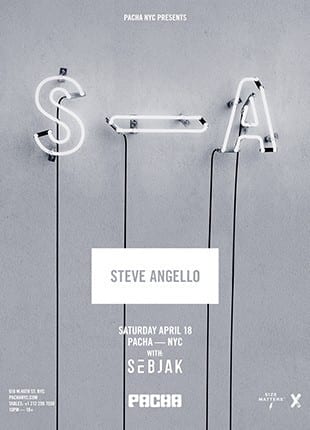 Steve Angello Takes Over NY with Two Shows in One Night

Nightlife politics often prevent a DJ from playing multiple venues in one night – but in the case of the Swedish House Mafia founding member and Size Records owner, New York has made an exception. Steve Angello will begin his night at Marquee New York, followed by an after hours set at Pacha New York. The iconic DJ has played every festival on the planet; no single club can fit the high demand.

Since the parting ways with supergroup Swedish House Mafia, Steve Angello has been gearing up for the release of his first full album, Wild Youth, in July 2015. The lead single “Wasted Love” – featuring Dougy of the alternative rock band Temper Trap – came out in summer 2014 and instantly turned into one of the season’s most popular tracks with remixes by AN21 & Sebjak, Grum and Dirty Vegas.