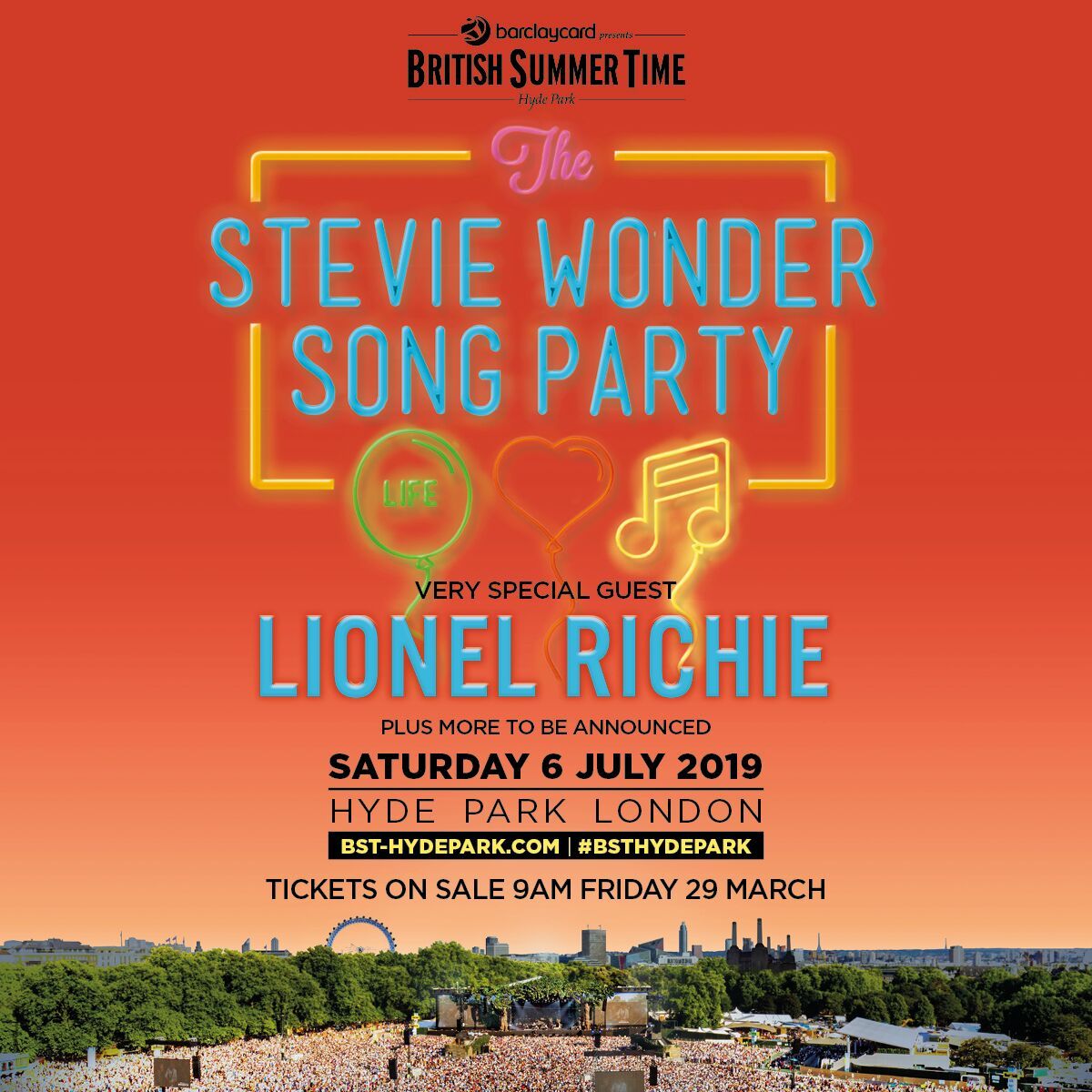 Stevie Wonder is one of the most celebrated and prominent figures inpopular music who, at the age of 12, was the youngest recording artist to have achieved a #1 single with “Fingertips, Part 2”.

To date he has amassed 49 Top Forty singles, 32 #1 singles and worldwide sales of over 100 million units. Stevie has won 25 Grammy Awards, the prestigious Grammy Lifetime Achievement Award, a Golden Globe and an Academy Award.

As an activist, Stevie also spearheaded the realization of “Martin Luther King Day” as a national holiday. His participation in the “We Are The World” fundraiser for hunger in Africa was a music industry milestone and his involvement to put an end to apartheid in South Africa is legendary. He is the youngest recipient of the Kennedy Center Honors, and is a Commander of France's National Order of Arts and Letters.

Stevie was awarded the Library of Congress' Gershwin Prize for Popular Song where he performed his commission, “Sketches Of A Life," which placed him in a very select group of eminent composers who have received library commissions, including Aaron Copeland, Leonard Bernstein and Paquito D'Rivera.

Stevie has received the Presidential Medal of Freedom, and he is a designated U.N. Messenger of Peace with special focus on persons with disabilities. He continues to be a pivotal influence in U.S. and world events, demonstrating the activism that has made him such a vital voice for social progress and world harmony.

Lionel Richie will be amongst the very special guests sharing the Great Oak Stage on July 6th. In December 2017, Stevie Wonder performed a cover of ‘Easy’ at Richie’s Kennedy Center Honours ceremony, which left Richie visibly emotional. He later said, "I got into the business because I wanted to be like Stevie Wonder, so for all of a sudden for Stevie to be singing my song, it was surreal."

Lionel Richie has a discography of albums and singles that are second to none. His music is part of the fabric of pop music; in fact, Richie is one of only two songwriters in history to achieve the honour of having #1 records for nine consecutive years. Richie has sold more than 100 million albums worldwide and is an Oscar, a Golden Globe, and four-time Grammy Awards winner. He received the distinction of MusicCares person of the year in 2016 and was a Kennedy Center Honoree in 2017.  In March 2018, Richie put his handprints and footprints in cement at the TCL Chinese Theatre IMAX in Hollywood, one of the oldest awards in Hollywood. Lionel Richie is known for his early work with The Commodores as well as for his solo mega-hits including “Endless Love,” “Lady,” “Truly,” “All Night Long,” “Penny Lover,” “Stuck on You,” “Hello,” “Say You, Say Me,” “Dancing on the Ceiling,” and one of the most important pop songs in history, “We Are the World,” for USA for Africa. With his most recent All the Hits, All Night Long Tour, Richie sold out arenas worldwide with a set list of his brightest and best anthems. In recent years, he has also headlined festivals including Bonnaroo, Outside Lands, and Glastonbury, drawing the festival’s biggest crowd ever with more than 200,000 attendees. Richie was a judge on ABC’s American Idol and has returned to the ‘Judge’s’ chair for the 2019 season.

Last year continued the tradition of must-see experiences that has seen The Rolling Stones return to Hyde Park, Carole King play her classic album ‘Tapestry’ in full for the first time ever, comebacks for The Strokes and The Libertines and many more.

James King, Senior Vice President, AEG Presents, comments:
“There are headliners, great headliners, line ups, stellar lineups and a thousand other adjectives we use but we will never find the one that correctly describes what will be happening in Hyde Park on Saturday July 6th. Stevie Wonder is singing his biggest hits for his very own 'Song Party' and for good measure, and to our mutual amazement, joy and wonder, he is also bringing his good friend Lionel Richie.
See you down the front.”

Daniel Mathieson, Head of Experiential Marketing and Partnerships for Barclaycard, says:
“We are honoured to host not only the prestigious and iconic Stevie Wonder but also another special guest in the form of Lionel Richie this Summer. Stevie and Lionel have been part of the fabric of music and culture globally for the best part of six decades and between them have an incredible amount of accolades as testament to their phenomenally successful music careers. It’s ‘signed sealed and delivered’ – Saturday night couldn’t get any better.”

Alun Mainwaring, Head of Events and Filming at The Royal Parks, says:
“We’re hugely excited that these two legends of music will be playing together on The Great Oak Stage at this very special gig.  Stevie Wonder and Lionel Richie is sure to be a sellout show and party of the summer.  We can’t wait to see this happen in Hyde Park on what will be a fun and memorable day for the lucky fans.

“This final announcement completes the set of phenomenal world class headline artists over the two weekends in July. These events are vital to The Royal Parks to provide the funds required to help maintain these beautiful London parks.”

Sign up for the BST Hyde Park presale:
https://www.bst-hydepark.com/newsletter/stevie-wonder-presale-signup