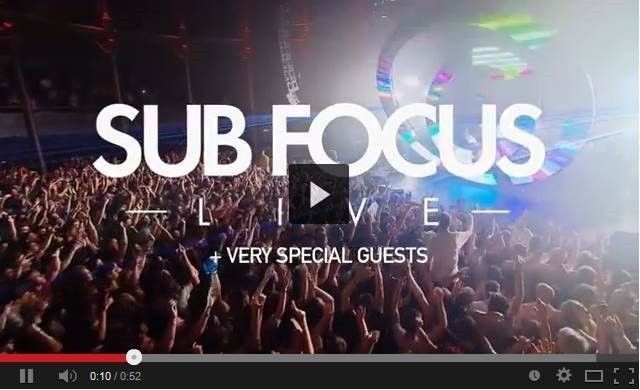 Sub Focus will be playing a landmark show at London’s Brixton Academy on the 17th April, featuring some very exciting special guests.

To coincide with this news, Sub Focus, also confirmed that the next single to be released from critically acclaimed second album Torus, will be the soulful, deep house offering Close.

Close is the follow up to the huge smash hit Turn Back Time, which smashed into the UK Top 10 singles chart, and has sold over 100,000 copies. Turn Back Time also spent 5 weeks in the Top 5 of the Shazam chart and was without a doubt one of the most played tracks at UK radio in the past month.

With one of the most talked about and impressive live shows in electronic music, which uses ground breaking audio reactive and circular LED technology, Sub Focus has been wowing the masses across the world, having taken his live show to some huge festivals last year including Glastonbury, Electric Daisy Carnival, Dour Festival and Reading and Leeds to name a few. After releasing his second album Torus in September, Sub Focus embarked on a sold out UK Live tour which included a momentous show at London’s Roundhouse and finished the year with a hugely successful DJ tour of the USA, which included a sold out show at the iconic House Of Blues on the Sunset Strip. 2014 is already shaping up to be a very exciting year, as well as the forthcoming Live at Brixton show, Sub Focus plays Snowbombing Festival, Ultra Music Festival in Miami and Future Music Festival in Australia, with more to be announced soon.

Sub Focus, aka Nick Douwma, is a man with an impressive resume. As a drum’n’bass producer he has already delivered one genre-mashing breakout album to critical acclaim (2009’s ŒSub Focus’ on Ram Records) while nailing a plethora of highly billed festival sets, including packed out headline sets at Glastonbury, Reading and Leeds Festivals and Wireless this past Summer to name a few.

Torus, Nick’s second full length studio album, is a collection of eclectic genre shifting tracks that is pushing his reputation beyond the dance hinterlands and into the mainstream. Blending house pulses and juddering dubstep rhythms with drum’n’bass breaks and the brooding, ambient synths once favoured by the likes of ’80s electro mavericks, Vangelis and Jean Michel Jarre, this is release of catch-all appeal: festival anthems, dance floor epics, and headphone symphonies all rolled into one seamless, Technicolor journey, featuring stand out guest appearances from Alpines, Foxes, Kele Okereke and more.