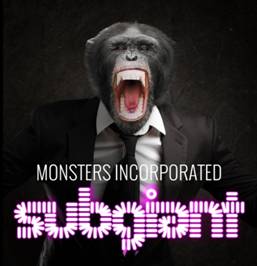 Subgiant are back and the world is about to be taken over by Monsters!
Yes, it’s true. The Electro Bass trio have returned from a crazy year of festival touring to release an epic new track which paves the way for a forthcoming EP this summer of carefully crafted deep bass, intelligent electro and filthy drum beats.

Sound appealing? Well it should as this is what Subgiant are all about. Very much a product of their environment, namely different parts of the UK, and deeply passionate about live dance music; perhaps similar in a sense to acts like The Prodigy and Orbital through to 2 Many DJs and Disclosure, where every festival and performance embodies the total definition of a ‘rave’. Yes, a place and time where crowd and artists on stage are one, and the experience is transcendental, the memory treasured for life.

This is what Subgiant personify, and so expertly deliver each and every time. Their live show may well rip up versions of rock and rap classics like Rage Against The Machine’s ‘Killing In The Name Of’ and House Of Pain’s ‘Jump Around’ to ecstatic effect, as well as dropping their self-penned bombs like last year’s mammoth bass-stepper ‘All Day’.  As the trio of gifted producers, Olly Maw, Dan Hayes and Tushar Joshi go from a regular spot at Glastonbury to just about every other major summer festival in Europe they demonstrate their effectiveness by taking the DJ out of EDM and performing everything completely live.

For the video of new single ‘Monsters Incorporated’, Subgiant’s drummer Tushar Joshi explains, “the band spent a weekend in Shoreditch working on the track and observing the crazy destruction of the area on a Saturday night whilst we were secure in the studio. So the video provides the theme of all the chaos going on around the world whilst people are glued to their TV sets oblivious to their surroundings watching a shopping channel. Oh and we thought we’d set it in Tokyo and stick a monster in there called Kaiju.”

Subgiant will be announcing tour and festival dates for 2014 soon, ‘Monsters Incorporated’ is released on June 4th.