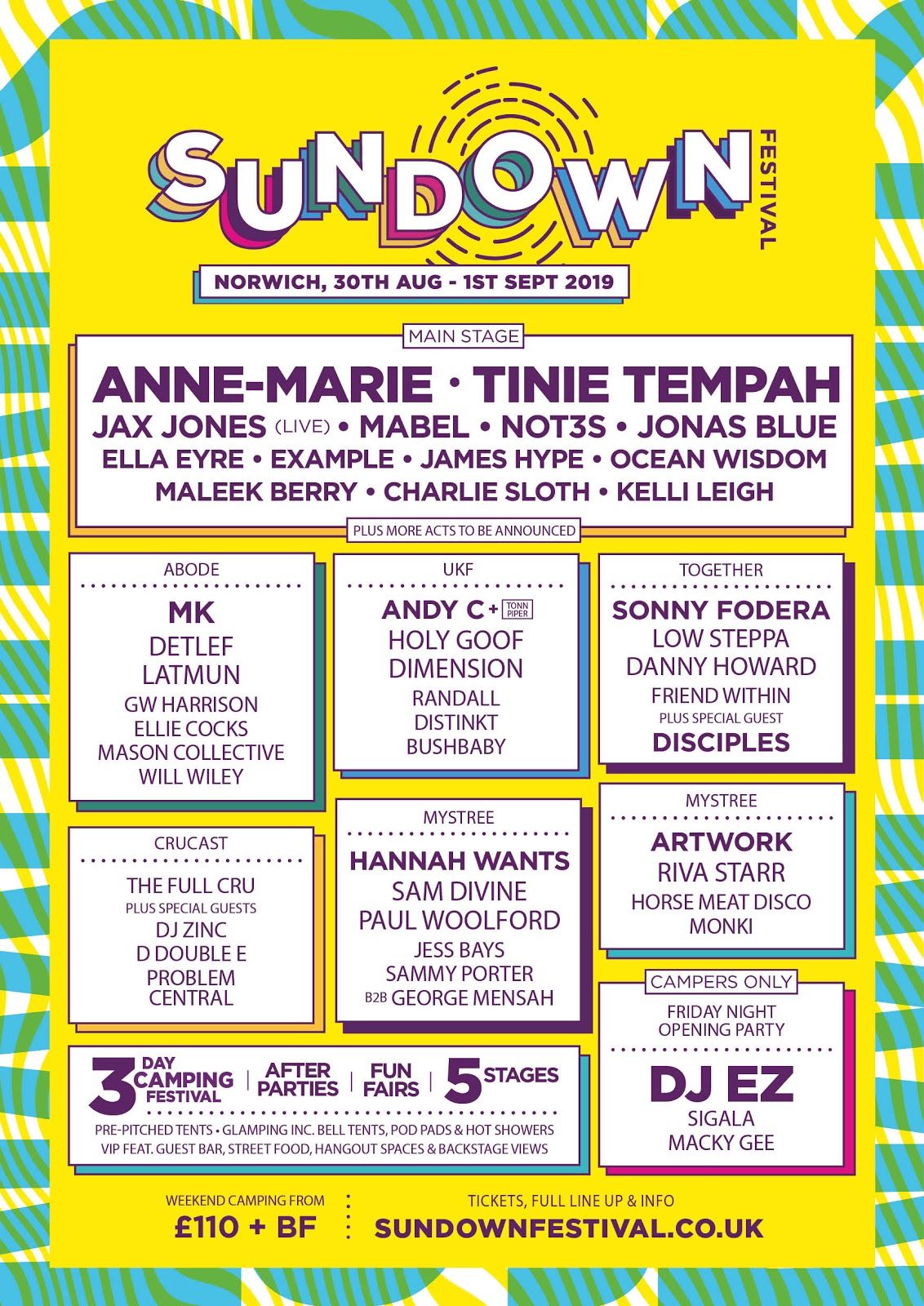 Known for her playfully infectious pop spirit matched with her captivating and relatable lyricism, the unstoppable Anne-Marie has become one of the leading voices in British contemporary music as the biggest-selling breakthrough artist of 2018. Gaining popularity through show-stealing features on singles from Rudimental to Dizzee Rascal, she also collaborated with previous Sundown headliners Clean Bandit for their double platinum earworm ‘Rockabye’ which also featured Sean Paul. 2018 saw Anne-Marie release her chart-topping debut album ‘Speak Your Mind’, support Ed Sheeran on his global stadium tour as well as feature on David Guetta’s massive track ‘Don’t Leave Me Alone’. Earning 9 x BRIT Award nominations to date, pop’s hottest star has racked up over 5 billion streams and 12 million global single sale, making for an unmissable experience when Anne-Marie headlines Sundown Festival.

One of the leading voices of the UK urban scene, award-winning UK rapper-turned-global-superstar Tinie Tempah is guaranteed to bring an electrifying headline set to Sundown Festival. With an expert craftsmanship to his hard-hitting bangers, the UK rap sensation lists hottest names in the global music industry as friends and collaborators, in artists such as Calvin Harris, Big Sean, Ellie Goulding, Emeli Sandé and Dizzee Rascal to name a few. Armed with unrivalled hits such as ‘Frisky’ and ‘Pass Out’, it’s no wonder Tinie Tempah has effortlessly embarked on arena tours, topped festival bills and earnt multiple BRIT Awards; he is the ultimate in UK rap talent.

Arguably one of Sundown’s most exciting events, Friday night will see the return of the must-attend Campers Only Opening Party which this year will be hosted by incredible electronic triple threat; DJ EZ, Sigala and Macky Gee. A pioneer in UK Garage, veteran selector EZ has been in the game since its inception, first making his name in the pirate radio scene and climbing to huge commercial success ever since. Following his party-starting set on the mainstage at last year’s Sundown, Norwich’s very own DJ and producer Sigala will be returning to the festival for the exclusive Campers Only Party alongside SaSaSaS member Macky Gee, who will supply his legendary drum and bass, making the opening night at Sundown a party one not to be forgotten.

Grammy and BRIT Award nominated DJ Jax Jones will get crowds to their feet with a perfect soundtrack featuring the worldwide smash ‘You Don’t Know Me’ and latest singles ‘Instruction’ and ‘Breathe’. Amassing over 120m+ Spotify streams on the aforementioned singles, the London DJ boasting over 1.5 billion streams as well as 11 million single sales; an incredible feat that Sundown Festival cannot wait for.

Bringing her smooth reinvention turn-of-the-century Soul, R&B and British pop music, Sundown Festival is delighted to welcome Mabel to the mainstage for the very first time. Forging her path away from the accomplishments of her parents, Neneh Cherry and Massive-Attack producer Cameron McVey, the soon-to-be superstar revealed her debut track ‘Know Me Better’ to an overwhelming reception. Following up with ‘Finders Keepers’ and ‘One Shot’, Mabel’s debut album may one be the most highly-anticipated releases in the last decade.

Joining the sultry pop sensation at Sundown Festival will be rising star and collaborator, Not3swho has taken 2018 by storm with an expert mix of vital and refreshing cuts. Famed for master lyricism, the UK star made waves with tracks ‘Addison Lee’, ‘My Lover’ and ‘Aladdin’ racking up 100 million streams before working with Chip, AJ Tracey, Mabel and Young T & Bugsey over the last year. Recognised at the GRM Awards who named Not3s as Artist of The Year, his sun-soaked jams will be perfect at this summer's closing extravaganza.

Chart-topping UK Jonas Blue producer will deliver his signature dance-turned-pop tracks whileElla Eyre will take to the stage in a whirlwind all-pop performance fresh from her latest collaboration with Sigala, Meghan Trainor and French Montana. Dance legend Example will return to Sundown with unforgettable classics ‘Changed The Way You Kissed Me’ ‘Kickstarts’ and powerful new anthem ‘All Night’ alongside James Hype also set to bring festival-fillers to Sundown.

Switching it up with a mastermix of hip-hop, grime and jungle, Brighton-born MC Ocean Wisdomwill spit ultra-quick lyrics like those exhibited on his track with Wu Tang Clan’s Method Man ahead of Maleek Berry, the British-Nigerian producer responsible for summer hit ‘Love You Long Time’ which featured Chip. Former 1Xtra now Beats 1 presenter, Charlie Sloth and returning singer-songwriter Kelli-Leigh are also among hotly-tipped names to touch down at Sundown this summer.

In addition to the glittering mainstage, Sundown Festival will continue to provide a haven of genre-defying performances from the very best in drum and bass, house and techno.

Hosting a one-day stage takeover, CruCast will be in attendance with the full crew plus special guests DJ Zinc,  D Double E and Problem Central with even more names to be revealed.

Together are back in 2019 with a series of even more infectious sets. This year, Sonny Foderawill top the bill, with Low Steppa and Danny Howard making their return, Friend Withinappearing with special guests and as well as a sure-to-be mind blowing set from  Disciples.

Renowned for its star-studded line-ups spanning grime, R&B, pop, dance, electronica and more,Sundown Festival has become the essential summer closing party, providing one last chance to party in the sunshine with some of the world’s most exciting artists.

Tickets are available at www.sundownfestival.co.uk/tickets from 9am on Friday 1st March. Follow @SundownUK for more info.

Available from 9am on Friday 1st March