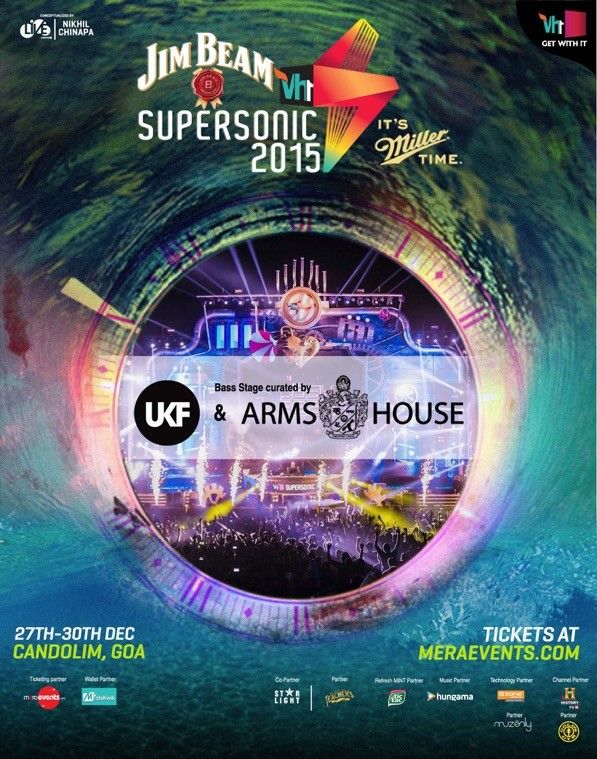 Gear up music lovers. Vh1 Supersonic is back in the party capital of India – Goa, with its 3rd edition. Its first line up of artists comprises American EDM artist Deoro, and English electronic music duo Disclosure. With a promise to enthrall music fans in a bigger manner, India’s definitive dance music experience Vh1 Supersonic has pumped up to bring together some of the world’s best artists on a common platform. So freeze your calendar dates from December 27th -30th, as the festival, in Candolim, Goa will transport you to an unparalleled world of unadulterated music and dance against the backdrops of sand, surf and EPIC fun.

Commonly known by his stage name Deorro, Erick Orrosquieta, is a Mexican American DJ who used to go by his former name of TON!C. Disclosure is an English electronic music duo, consisting of brothers Howard and Guy Lawrence whose debut album, ‘Settle’, was nominated for Best Dance/Electronica Album at the 2014 Grammy Awards.

Unequivocally voted the most amazing stage by Vh1 Supersonic lovers last year, the UKF & Arms House promises to be back again this year to satiate the yearnings of drums and bass followers. Continuing with its successful partnership with UKF & Arms House, this time the music festival plans on giving drum and base fans an enthralling experience by curating the Drum and Bass Stage at Vh1 Supersonic. Upping the excitement, this year the festival is also partnering with The Awakening – ‘the techno organization from Holland’. Considered as one of the best ‘Techno festivals’ in the world, this year they will be seen curating the techno stage at Vh1 Supersonic Goa festival.

Talking about the launch of the 3rd edition of the music festival, Jaideep Singh, Sr. Vice President and Business Head – LIVE Viacom18, said: “From starting a festival in 20 days in its inaugural year to 110 events last year to 160 events this year, Vh1 Supersonic has seen an interesting musical journey. Today’s announcement is a testimony to the spirit and promise to our fans to provide them with a holistic experiential experience. Our vision at LIVE Viacom18 is to reach out to aficionados of music, ignite the collective passion for dance music and fulfil the needs of devoted music lovers. The 3rd edition of this festival with its exciting line-up of artists and association with the global music fraternity will be an experience that fans will remember for a long time to come.”

Building on last year’s success where approximately 100,000 dance music fans surrendered to the enigma of dance music at Candolim beach, Vh1 Supersonic Goa 2015 has geared up to be a much grander affair this year.

You know where the party is at this December! The 3rd edition of Vh1 Supersonic beckons you!

Live Viacom18 is a is a wholly owned subsidiary of Viacom18 Media Pvt. Ltd. Live Viacom18  was  set  up  with  a  strategic  objective  of  growing  International  entertainment  and  its  consumption on all platforms : Live, Television, Mobile and Online. Live Viacom18 focuses on building IP’s in all genres of Music (EDM, Rock, Pop and Jazz) and Entertainment (Comedy and theatre shows). LIVE Viacom18 has built more than 12 large format IPs across categories over the last few years and is uniquely positioned to build a 360 degree promotional and fan base built   up ecosystem.  Live  Viacom18  has  a  strong  technology business called Spotlight which has  direct  partnerships  with  all  leading  telecom  and handset operators in India which give its  access to 900 million touch points for pushing  consumption of music, varied form of content  and  music  from  the  live  events  and  Artists  bytes and trivia. LIVE Viacom18 engages with millions of consumers through impactful large format live properties such as Vh1 SUPERSONIC MTV VMAI, Nickelodeon KCA, Emerge, MTV Xtreme, and Comedy Central Chuckle Festival amongst others.