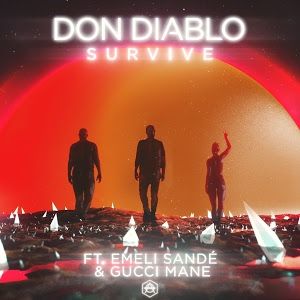 His most ambitious project to date, the music video for ‘Survive’ follows Don’s journey on a foreign planet, as he scans the local atmosphere for any sign of life. Directed by Don himself and shot byHEXAGON FILM the video makes for the biggest production for the creative artist so far. The visual shows Don receiving a hologram message from Emeli Sandé, who soon joins the DJ inside their space-shuttle. The duo are accompanied by the golden astronaut figure of Gucci Mane, as they navigate their way through a war-torn apocalyptic world.

Laced with Don’s deep signature bass-lines ‘Survive’ has already racked up over 3 million Spotify streams to date, and precedes the DJ & producer’s forthcoming VIP mix of the track, and his sold-out ‘Future XL’ show in Amsterdam this winter.

Having released his second album titled, FUTURE at the start of the year, the Dutch star has played at mainstages of major festivals across the globe, including Pinkpop, Creamfields, Tomorrowland, EDC, Untold festival, Parookaville, Ushuaia, Hi Ibiza & MORE!