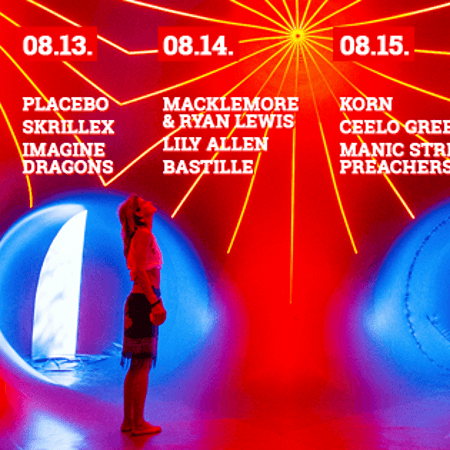 For the first time in the history of the event all advance passes are sold out. As of 4th August, only day tickets are available for Sziget Festival that kicks off in exactly 1 week time with an eclectic lineup including; Queens of the Stone Age, The Prodigy, Placebo, Macklemore & Ryan Lewis, Outkast, Blink 182, Korn, Calvin Harris, Skrillex, Deadmau5, Lily Allen, Madness, Bastille, Imagine Dragons Cee Lo Green, Manic Street Preachers, Axwell, The Kooks, Jake Bugg, Stromae and many many more!

One week before the start of Sziget – and for the first time in the history of the event – organizers announced that all presale passes are sold. Organizers have decided to reserve the last 1000 festival passes for on-spot sales, also as an effort to keep unofficial ticket retailers away from the gates. Károly Gerendai, founder and main organizer, said that the increasing interest was seen throughout the year and he believes that “it is because of the good line-up and the success of the services introduced couple of years ago.” More visitors are coming from Hungary and from all over Europe as well. He thinks that the latter can be thanked to the fact that Budapest is becoming trendier than ever in the last couple of years. It is also important to emphasize that Sziget puts a lot of effort in its international promotion and the hard work is evidently showing its results.

Gerendai has also added: “We have limited the number of passes in 45.000 and the day tickets have a limit as well, 25.000 daily. All together with the VIP visitors, contributors and staff the infrastructure of the festival can serve 85.000 people comfortably.” He expects that the final number of the total visitors throughout the non-stop week of fun can be more than 400.000 this year.

For all those wannabe-Szitizens that missed out on the presales period – and might not be quick enough to get one of those 1000 on-spot passes – organizers would like to emphasize the fact that day tickets for each of the 7 days are still available. At the same time, the Sziget crew kindly asks everyone to avoid buying passes from street vendors or internet advertisements, as many of those tickets are fake.

Sziget also does its best to support Szitizens with services that make the festival-holiday as comfortable as possible: Sziget Camping Sets are available to avoid luggage fees and to travel easy; Citypasses provide an easy and affordable way to explore Budapest; Safe&Fun insurances cover all risks a festival-goer might face.

And just to give that last boost for late-deciders, here’s what’s waiting for you:  Huge stars on the main stages; art, fun and tons of activities all over the island. During the day Szitizens can chill at the Sziget Beach, create their own souvenirs at one of the art venues, or just take time to have some adventures in the city of Budapest! The party already starts in the early afternoon and lasts till the sun comes up again!