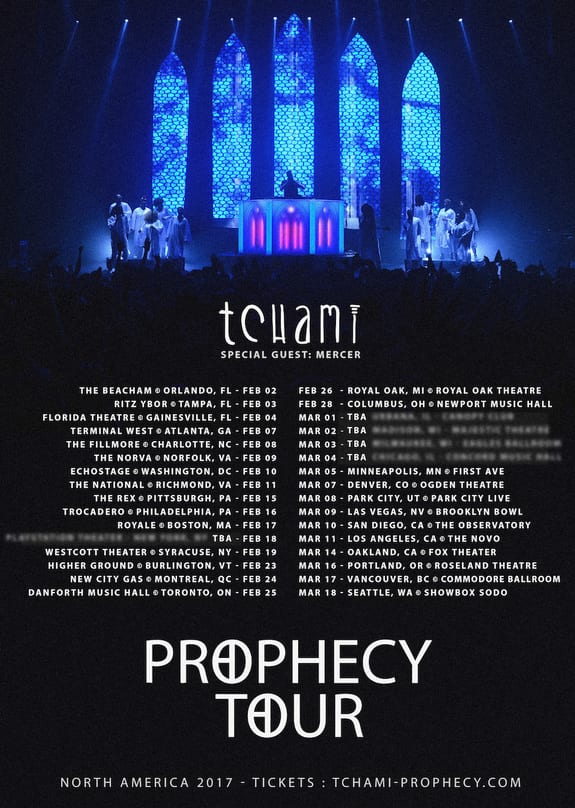 Over the course of his career, Tchami has managed to build a prolific reputation as one of the most sensational artists of his generation. From releasing his critically acclaimed EP 'After Life', to his debut  BBC Radio 1’s Essential Mix, to his Coachella performance alongside a live choir, 2016 has seen Tchami's success is only continue to flourish. Having just released a massive collaboration with the elusive Malaa, ‘Prophecy’, Tchami is now announcing the colossal 32-date North American Prophecy Tour with support from fellow Frenchman Mercer in tow.

Not only is he bringing back his stunning church stage which graced countless venues on his last tour, but Tchami has also rebooted his production, with numerous dates slated to feature the live choir he debuted at Coachella earlier this year. Now equipped with a new tour and his burgeoning record label Confession persistently churning out hit records, it’s only still the beginning for Tchami as he sets his sights and sounds for 2017 to expand his empire of Future House.

Having exceeded 1 million streams in the span of 2 months, ‘Prophecy’ has been received incredibly well among fans of Tchami & Malaa alike. Following a massive ’Prophecy’ remix package that featured the likes of Kyle Watson, Senor Roar, Michael Sparks, Bad Jokes and Jace Mek, it only made sense that Tchami embarked on this brand new tour in support of the impressive single so be sure to keep up with his socials and grab tickets before they sell out.