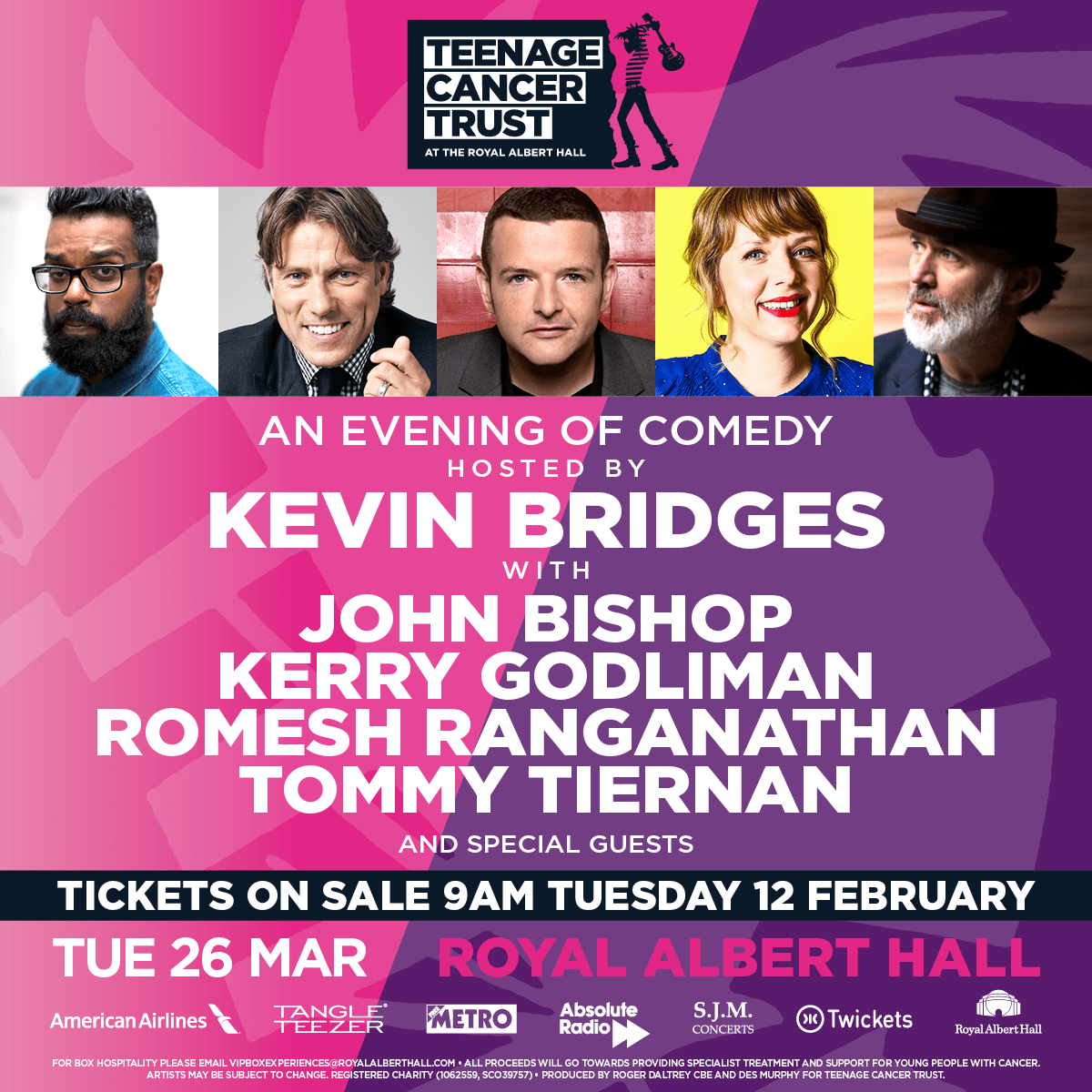 An Evening of Comedy for Teenage Cancer Trust at the Royal Albert Hall returns for the event’s 19th year and is set to be another special one. As well as welcoming some of the UK’s biggest music stars, Teenage Cancer Trust also welcomes some of Britain’s best-loved comedians for an evening jampacked with laughter.

We are delighted to reveal that, long term supporter of Teenage Cancer Trust and one of the charity’s official ambassadors, Kevin Bridges returns as this year’s host and will guide the audience through an exciting evening of comedy, continuing the long tradition of the cream of British comedy joining forces for a unique and unforgettable night of laughs.

These incredible shows have played a vital role in helping the charity to provide 28 specialist cancer units and over 60 nursing and support staff in NHS hospitals across the UK, making an incredible difference to young people diagnosed with cancer.

Kevin Bridges is a committed Teenage Cancer Trust Ambassador and Regional Patron for the West of Scotland and last performed the comedy night of Teenage Cancer Trust at the Royal Albert Hall in 2017. Bridges cemented his position as one of the UK’s most successful comedians last year when he was crowned the UK’s Ticket of the Year 2018 at the SSE Hydro by Ticketmaster fans – a remarkable feat given that no comedian has ever taken the top spot in the UK before. Bridges’ recent sold out tour earned him the Gie It Laldy award from the Glasgow arena, recognising his contribution to the live event industry, having sold more tickets than any other solo artist. His tour was record breaking, selling out 19 nights at Glasgow SSE Hydro arena.

He is also a well-known face on many television panel shows such as Would I Lie to You?, Have I Got News for You and has performed on Live at the Apollo and Michael McIntyre's Comedy Roadshow, as well as having his own television series Kevin Bridges: What's the Story?

Kevin Bridges said of hosting An Evening of Comedy and the Teenage Cancer Trust: “The fantastic work Teenage Cancer Trust have done over the years to provide specialist care and support to young people with cancer across the UK is incredible and it is a great honour to be asked to return to host the comedy night at The Royal Albert Hall."

Having performed in 2011, 2014 and 2016, the Teenage Cancer Trust is thrilled to have the incredible John Bishop return to this year’s comedy stage. John has performed numerous sell out stand-up UK arena tours, as well as achieving huge success with a number of his own comedy, entertainment and documentary shows including BBC’s John Bishop’s Britain, The John Bishop Christmas Show, John Bishop’s Gorilla Adventure and John Bishop: In Conversation With…

Other TV work includes John’s one-off special for Sport Relief, John Bishop’s Week Of Hell, a stint as team captain on Sky One’s A League of their Own and his guest appearances on Live at the Apollo. John took the reins as director and star of his own comedy drama for Sky One’s Little Crackers season.  His other acting work includes working with director Ken Loach in the thriller Route Irish, Jimmy McGovern’s critically acclaimed Accused and ITV1’s Fearless.

Charmingly, straight-talking, quick-witted Kerry Godliman will also be taking to the Royal Albert Hall stage. She is both an incredibly talented comedian and a phenomenal actor. Kerry is best known for her appearances on BBC’s Mock The Week, Live At The Apollo, Jack Dee’s Referendum HelpDesk, Celebrity Pointless and Channel 4’s 8 Out Of 10 Cats and BBC’s Celebrity Pointless. Kerry is also a regular on Radio 4 with appearances on the esteemed News Quiz, The Now Show and Just AMinute as well as her own series Kerry’s List.

Kerry’s acting talents have seen her receive critical acclaim for her role as Hannah in Ricky Gervais’ hit series Derek for Channel 4, ITV1’s Bad Movewhere she plays Nicky, as well as starring in the Netflix feature filmMascots and Sky’s Carter’s Get Rich and Save Me. She has also starred in Crackanory, Him And Her, Miranda, Getting On, Extras, Home Time, Our Girl and Channel 4’s Spoons, also appearing in several stage plays including England People Very Nice at the National Theatre.

The last few years have been incredible for Romesh Ranganathan with two series of his BAFTA and RTS Nominated series Asian Provocateur, his BBC Two series The Misadventures Of Romesh Ranganathan and his own Sky One sitcom The Reluctant Landlord all receiving critical acclaim and making him a household name. 2018 also saw Romesh become the new regular on A League Of Their Own, take on a new role as Judge Romesh for Dave and even managed to squeeze in writing his autobiography Straight Outta Crawley: The Memoirs Of A Distinctly Average Human Being which became a Sunday Times Bestseller.

Romesh will be back on tour in the autumn with his new show The Cynic’s Mixtape and tickets have already sold out at several venues.  This follows the success of his debut tour in 2016, Irrational, which sold over 100,000 tickets and resulted in him being awarded the Ents24 Hardest Working Comedian Of The Year.  The DVD/Digital release of the show is still flying high in the comedy charts with the highest sales of a debut in recent years.

It has been non-stop for one of the industry’s hardest working comedians. Last year also saw Romesh embarked on his career in America with the launch of his own series Just Another Immigranton Showtime which received critical acclaim selling across the globe and is currently airing on Sky One in the UK.  His time in America saw him appear twice on James Corden's Late Late Show and debut on The Late Show with Stephen Colbert.

Tommy Tiernan has been working as a stand-up comedian for the past twenty three years. He currently moonlights as a chat show host and newspaper columnist. A fearless force of energy, Tiernan is inspiring, and one of the few comics to take his audience on a genuine emotional journey elevating the soul through rich, honest laughs. Tiernan has an instinctive way of crafting words to bring his anecdotes to vivid life and make the jokes truly resonate. Performances are high intensity, high octane, a no holds barred roller coaster ride as Tommy continues his constant interrogation of the big ideas – Sex, Religion, Family through the lens of his quirks, personal demons and sense of outrage. Some TV credits include: Channel 4’s Derry Girls, Dave Allen at Peace, The Tommy Tiernan Show on RTE and Father Ted.

2019’s impressive line-up adds to an extraordinary legacy that has seen unique, once in a lifetime comedic performances from the likes of Jo Brand, Russell Howard and Michael McIntyre.

As well as welcoming comedy’s finest, Teenage Cancer Trust also brings you some of Britain’s biggest music stars: Rudimental and special guestskick things off at the Royal Albert Hall with their emphatic. hi-energy live show on Monday 25th March, Tom Grennan will perform for the first time on March 27th, followed by one of the most successful bands in British chart history, Take That, on 28th March. Alternative legends, Doves, who have just announced their return after a decade away, take to the stage on 29th March, pop/rock trio The Script on 30th March and English folk-rockers Levellers round off the week on Sunday 31st March.

Teenage Cancer Trust at the Royal Albert Hall was conceived and curated by the charity’s Honorary Patron Roger Daltrey CBE, the legendary frontman of The Who, and he still plays a vital role in making the shows, the charity’s flagship event, happen.

Tickets on sale 9am 12th February