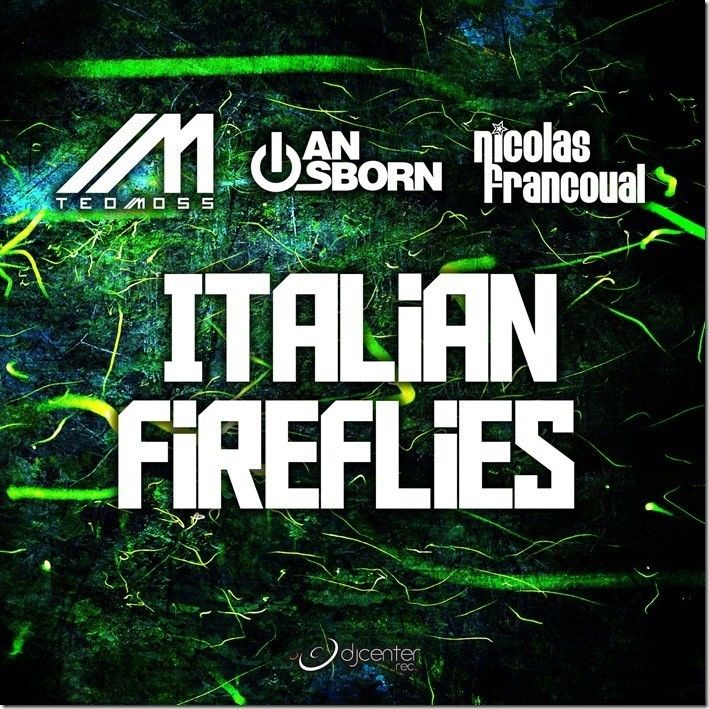 Watch out for another all-star release on one of the French leading Dance Music record company based in Paris, DJ CENTER RECORDS, as Teo Moss, Ian Osborn &  Nicolas Francoual presents their latest EDM masterpiece, “Italian Fireflies “!

Teo Moss represents is a resident FG Radio Dj & Producer and is known as one of the best remixer of the electronic stage in France. He’s worked with the biggest names in the industry to date such as Bob Sinclar,  Joachim Garraud,  Axwell,  Eddie Thoneick,  David Vendetta,  Didier Sinclair,  Gat Décor,  Stonebridge and has played in the biggest clubs such as the Queen,  Metropolis,  Folie’s Pigalle,  Red Light,  VIP Room,  Pacha and festivals; Parade techno Love Parade and Street Parade.

Ian Osborn started his career in music in 1998. However,  since 2001,  things begun to change quickly for Ian when he discovered house music thanks to Greg Kazubski (from the band Teenage Bad Girl). From that moment on,  his love of house music will had no limits ! Over the last few years,  thanks to his musical talent,  Ian has spinned the wheels with international DJs such as Benny Benassi,  Arno Cost,  Antoine Clamaran,  David Vendetta,  Danny Freakazoid,  Tristan Garner,  Chris Montana,  Muttonheads,  Téo Moss,  Jeremy De Koste,  Maia K,  Philippe B,  DatA,  Laurent Pepper,  DJ Assad,  Samantha Mayer– all over the world! As a result of his success,  he has got international recognition and has been rocking crowds in the USA,  Austria,  Tunisia,  Belgium,  Greece,  Czech Republic &Poland, … From Minneapolis to Vienna,  from Krakow to Paris,  from Brussels to Prague,  Ian only had one goal : to make the event unforgettable for clubbers. Obviously,  Ian has played regularly in his country of origin  too. Thus, he has not only he performed in the most famous clubs in Paris (Mix Club, Redlight, Back Up, Les Bains Douches, Salons Vianey, Zorba, Tribar, etc) but in the hottest spots in Lyon (Bloc, Eurexpo, La Cour des grands (Ex La Chapelle), La Plateforme, Le Pinks, Ké Pecherie, etc) as well. He was also known as the top of the bill in the biggest French student parties (Boom HEC, Nuit Paristech, Gala Telecom Paristech, Gala Centrale Lyon, Gala ENTPE, Gala ENST, Gala Santard, Gala INPG, Gala ENS Lyon, etc). To sum it all up,  when Ian is there,  the party is there. Ian is not only a DJ but also a composer. His skill as a remixer allows him to do remixes for famous artists such as DJ Disciple,  Chris Moody,  Tom Sawyer,  Mr Vasovski,  Andrew Phillips,  Teo Moss,  Jeremy De Koste,  Benedetto & Farina. In between 2010 & 2011,  more than 20 tracks and remixes have been out on the most famous international labels . Ian is also known for a lot of radio-shows in France and abroad. His international radio-show “Philosophy Of House” is and was broadcasted on radios such as Radio FG Clubbing (France),  HKGFM (Hong Kong),  QS Radio (The Netherlands),  SSRadioUK (UK),  DFR Radio (Czech Republic),  D-One FM (Belgium),  MixxRadio (France)