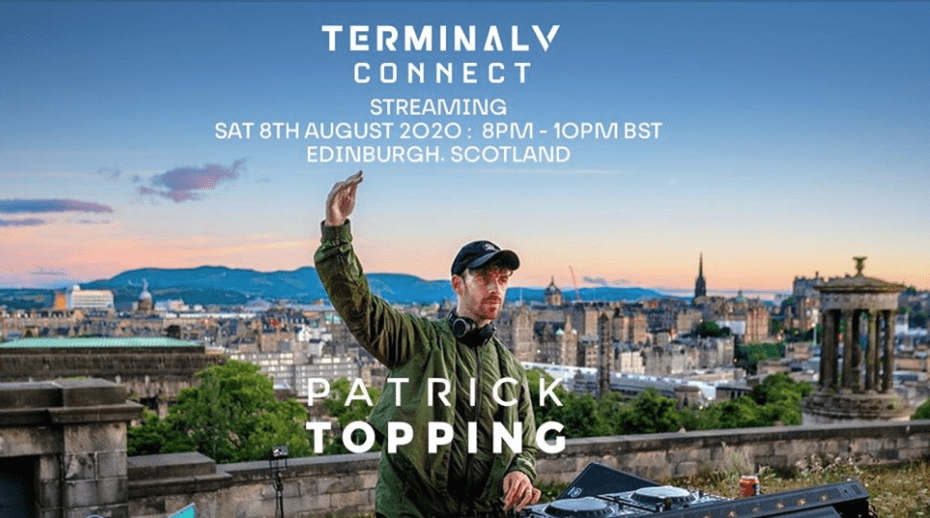 The much anticipated launch online event comes from firm Terminal V favourite Patrick Topping, who has a long standing relationship with the city, and the party. His set from the top of the stunning UNESCO World Heritage Site Calton Hill overlooking the city, which is one of Edinburgh’s most visited tourist attractions, with the city’s stunning skyline in the backdrop as well as views looking on to Edinburgh Castle, Forth Road Bridge, The Scottish Parliament Building and much more, will be broadcast on Saturday August 8th at 8pm – the same day he was due to make his Scottish Trick debut for a huge 5000 capacity Terminal V all-nighter event that has now been rescheduled to the end of the year.

Terminal V’s exciting new concept TERMINAL V CONNECT is a mixture of cutting edge, exciting platforms, ranging from stunning locations, home streams, XR augmented reality streams pushing new high-end XR technology and next level production featuring the very best international acts brought to audiences in a virtual and vital way. It is the sort of high class, high impact offering that Terminal V have become known for in recent years since their inception in 2017, with their huge festivals and raves always selling out a setting a new standard for electronic music events in Scotland. This launch also follows numerous hugely popular Terminal V Lockdown streams with the likes of Maceo Plex, Kink, Luigi Madonna and Rebuke who have all kept people dancing in the safety of their own homes whilst raising funds for charity.

The first TERMINAL V CONNECT event is a special one with global tastemaker Topping headlining from the iconic Calton Hill, Edinburgh. Calton Hill is the location of several iconic monuments and buildings such as the National Monument, the Nelson Monument and the Robert Burns Monument as well as the City Observatory. It towers over the city and is a truly famous location. From there, Topping played a typically tight and on point set with the stunning city backdrop and gorgeous sunset behind him through to darkness with lasers and projections filing the sky over the city. It all unfolded in blazing heat and the full two hours will be broadcast to the world via Beatport, Terminal V and Patrick Toppings social channels on Saturday August 8th.

Patrick went to Uni in Edinburgh so has lots of history with the city and Terminal V events. He had a capacity full stage at Terminal V festival Easter 2019 and later this year arrives in Edinburgh for his special Trick all-nighter. It was originally scheduled in August this year before the pandemic hit but has now moved to Dec 19th and is set to be a spectacular affair with a giant line up that will keep you dancing from dusk till dawn with Floorplan, Mella Dee, Cynthia, Elliott Adamson, Ewan McVicar and Reinier Zonneveld.

In the meantime, this is a fantastic taster of what to expect when he makes his big return. 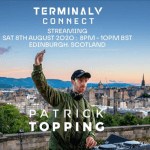