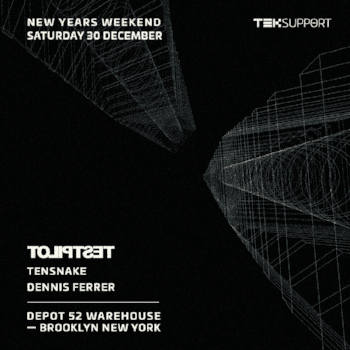 Coming to the venue fresh off the back of a widely acclaimed mainstage performance at Movement Festival in Detroit this summer, techno producer Testpilot will bring his eclectic selections and diverse mixes to the warehouse, having made a name for himself in the genre following a b2b mix with Richie Hawtin at SXSW.

The Canadian will be joined on the Depot 52 billing by Grammy nominated American house producer, Dennis Ferrer. The Pacha Ibiza resident has carved a unique reputation for himself through a series of releases on highly respected labels such as Defected Records, and his very own Objektivity label, and will be sure to bring his warm synth-fuelled grooves to the Brooklyn venue.

Joining them will be German DJ, Tensnake, famed for his iconic production ‘Coma Cat’ which has become one of Ibiza’s most-played and timeless anthems. His debut album ‘Glow’ featured a number of collaborations with the likes of MNEK, Nile Rodgers, and three-time Grammy winnerStuart Price, with the Berlin-based producer best known for his dynamic live sets.

Having previously been used as a submarine manufacturing plant at the turn of the century, Depot 52 has kept the original steel and brick work in tact to create an organic and atmospheric feel, combining the rustic and modern as the ancient interior meets one of the most advanced sound and light system in the world.

Becoming one of Brooklyn’s most in-demand venues, Depot 52 has become a breeding ground for the very best names in dance music, with the likes of The Martinez Brothers, Black Coffee,Solomun, David Squillace, Jamie Jones, Seth Troxler and Loco Dice all playing the venue as part of the Circoloco Halloween New York event.

The event, produced by Teksupport, is sure to sell-out fast with even more acts still to be announced, with tickets released on Tuesday November 21st 12pm EST.