THANK YOU from LOVE FAMILY PARK 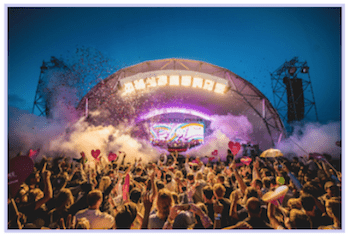 THANK YOU from LOVE FAMILY PARK

20,000 visitors join together to celebrate the finale sets from Sven Väth and the German national football team

Last Saturday saw Love Family Park take place in the picturesque Messepark in Mainz for the third year running, with an amazing 20,000 visitors coming to celebrate the occasion. Having run for 21 years as one of the biggest events of the techno and house calendar, this year saw the festival exceed expectations, as they transformed the Messepark into an open air oasis and united the heavyweights of electronic music to soundtrack the day.

Love Family Park 2016 saw fantastic debuts, from the likes of Mixmag’s 2012 DJ of the year Solomon to the record-breaking stream from Ibiza king Carl Cox, who’s facebook live video got 500,000 views from Carl’s fans within the shortest time. Italian techno hero Joseph Capriati’s early show saw the get together of German and Italian fans, as for the first time in LFP history, 10,000 visitors were able to watch the quarter-final between the two nations on the LED wall of the main stage, remaining on-site until after the final act finished at 10pm. Special mentions go to Chris Liebing, Karotte, Ricardo Villalobos, Aka Aka feat. Thalstroem and Anthony Rother, who closed each of their stages with euphoric performances. The Godfather Sven Väth was left to close the main stage, and as a feeling of unity and elation hung in the air, thousands of paper hearts fluttered through the air to leave a stunning spectacle.

A huge thanks goes out to the Mainz authorities, the acts, the partners, sponsors, helpers and most importantly the festivalgoers, who once again made this year’s Love Family Park an unforgettable experience.

We will see you next year! Sonus Festival up next…