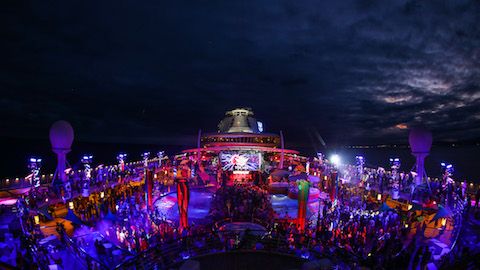 The sold-out first edition of THE ARK made a splash as the biggest and best quality partycruise in the world. From 31 August to 3 September, over 4,000 passengers got to experience 90 DJs, including major names such as Roger Sanchez, Masters At Work, Sven Vath, Chris Liebing, Amelie Lens, Peggy Gou, Gerd Janson, Felix da Housecat, 2MANYDJS and Claptone, along with culinary delights provided by top chefs Nick Bril of The Jane, Piet Devriendt of restaurant De Oesterput and the Dutch chef Steve Depp. And between parties, there was plenty of time to enjoy all the facilities on board the ship and to do some sightseeing on land during stops in Marseille and Ibiza.

The success of the first edition has inspired the organisers to build further on the concept, and they are now unveiling the 2018 edition of THE ARK. Departure and arrival will remain in Barcelona but this time, there will be six different departure date combinations and 2 cruises between the 30th August and the 7th September, making this 2nd edition even bigger than ever. One notable innovation is that this year, during the stop at Ibiza, THE ARK will stay moored at ’The White Island’ from 11 AM until 2 AM. This will give passengers the chance to make the most of their visit to the party island. What’s more, in 2018 The Ark will be adding an extra day (5 days, 4 nights), with an extra stop in Palma De Mallorca.