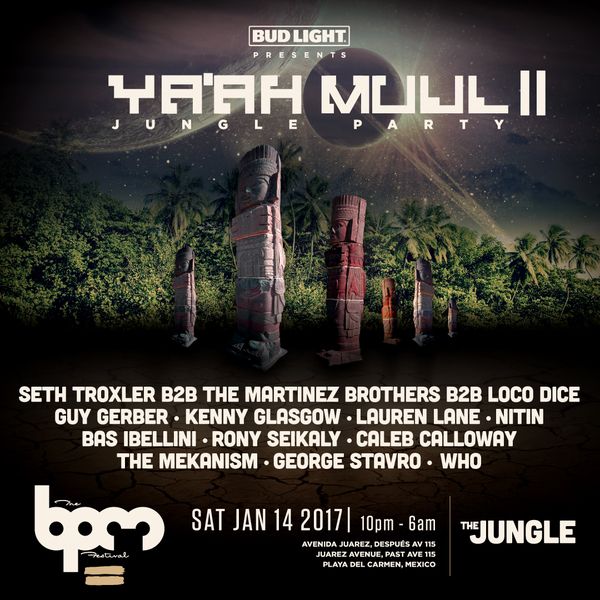 After making waves amongst the dance music community with the announcement of its Phase 1 artist lineup that featured over 100 of the world’s finest DJs accompanied by its first twenty showcases made up of some of the most respected labels and party brands, The BPM Festival welcomes ten additional showcases for its 2017 tenth anniversary edition in Playa del Carmen, Mexico, taking place January 6-15, 2017.

Commemorating the festival’s decade long rise to prominence and influential stature within the global festival circuit – Mixmag, Handlebar Films, and Bud Light Mexico present the trailer for The BPM Festival Official Documentary: Dancing in Paradise. The full length documentary film will highlight the festival’s history and meteoric rise to being one the world’s most important dance music events in the world that establishes the tone for the remainder of the year over the last decade. A Handlebar Films production directed by Kevin MacKenzie, the film features interviews and behind-the-scenes views with festival directors and staff, Rafael Castro Castro, former Playa del Carmen Mayor and the Secretario General of the Municipio of Solidaridad at the time of filming, Director of Bud Light Mexico Nicolas Mamboury, and a worldwide palette of BPM artists including Apollonia, Boris, Cassy, Chus & Ceballos, Coyu, Danny Tenaglia, Dubfire, Dusky, Ellen Allien, Gorgon City, Hector, John Digweed, Lauren Lane, Nicole Moudaber, Richie Hawtin, Robbie Akbal, Solomun, Stacey Pullen, Steve Lawler, and more as they examine the cultural connection and parallel development within this historic region and the impact the festival has had on the music scene in Playa del Carmen, Mexico and beyond. The film will premiere during The BPM Festival 2017 with a free screening for fans and exclusive screening for industry & media presented by Mixmag.

The BPM Festival passes (3, 7, and 10-day) are on sale now while supplies last via www.thebpmfestival.com/tickets.