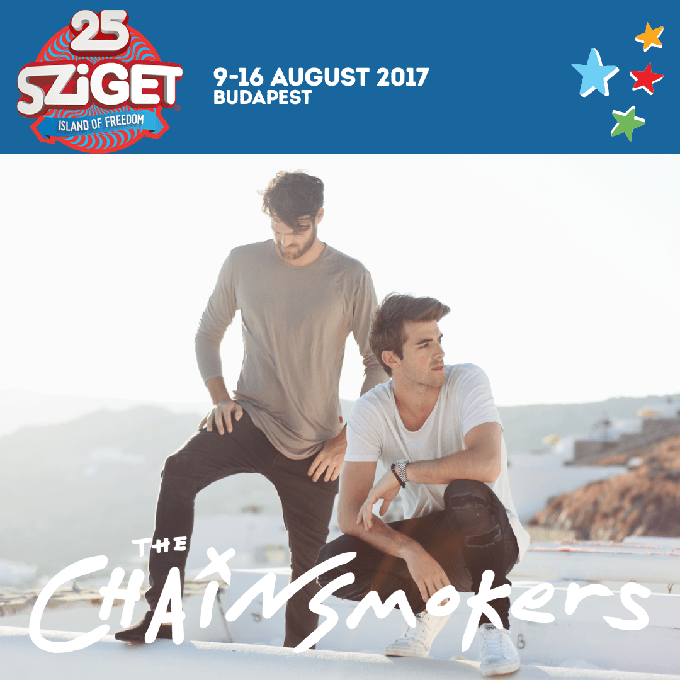 The Chainsmokers are coming to Sziget! They will perform on the Dan Panaitescu Main Stage on 13 August!

Taking place in Budapest from 9-16 August, 2017 Sziget will once again welcome music and art lovers, open-minded people from all over the world to join them for a non-stop week of fun with more than 50 program venues where festival goers can enjoy music, theatre, dance, art and much more! The detailed program schedule is coming soon.

To feel the real Sziget atmosphere watch the official aftermovie, summing up the 7 days craziness and good vibes. Click here

So how did it all start?
The brainchild of musician Péter Müller and manager Károly Gerendai, Sziget was born as a result free and open-minded spirit surrounding the change of the political system in the early 90's. Launching in 1993 as Diáksziget or Student Island and although the lack of funding was always an issue, creativity became the major capital of the team. This led to the organizers bringing things to the festival that were important for them personally and how there music, film, theatre and all other forms of art were included. The first event offered 200 concerts on 2 stages, 40 theater productions and 80 movies shown in an open-air cinema and attracted over 43,000 people.

The second event in 1994 launched the event onto the international stage after Müller and Gerendai realized that 1994 was also the 25th anniversary of the legendary Woodstock. Their tribute event 'Eurowoodstock' included headline acts such as Jethro Tull, Ten Years After, Frank Zappa's Grandmothers of Invention, Jefferson Starship, Birds, Blood Sweat and Tears and Eric Burdon gaining them international media attention including MTV.

The 3rd edition was make or break for the team as they needed to start making money to cover the losses of putting on major acts in the second edition. In 1995 the event found major sponsorship and became Pepsi Sziget, giving the organisers financial stability and the ability to book more international bands.

From 1995 to 2000 the festival included artists such as Slash, Iggy Pop, The Prodigy, David Bowie, Motörhead, Rollins Band, Faith No More, Asian Dub Foundation and Faithless with the audience growing from 173000 to over 300,000 visitors. The international spirit of Sziget started to show with more and more foreign guests discovering the Budapest-based event, while the organizers became founders of the Yourope festival association and MTV covered the event.

Throughout the noughties the festival continued to grow and Sziget became it's own brand in 2002, celebrating the 10th edition of the festival.

The festival even achieved 2 to Guinness world records! One for group kissing, with the participation of 1592 couples and the second for a huge painting called the Festival Cyclorama (with the gigantic dimensions of 80 meters length and 390 square meters of surface area) produced by the audience. This was 9-times bigger than the earlier record and in the end more than 6000 fans took part in the painting works.

In 2012 Sziget won the Best Major Festival title at the European Festival Awards — a massive vote of confidence from fans all over the world. Besides this the event also made the top 5 in the Artists' Favourite Festival category, showing that both fans and musicians clearly agree about Sziget's qualities. Another important acknowledgement in the same year came from Glastonbury's founder Michael Eavis. Answering to a question from New Musical Express he said that fans who are looking for an alternative to Glastonbury (not taking place in 2012) should simply go to Sziget. We have to agree.

In 2013 Cirque du Sziget du was born with a separate venue for unique and modern circus performances. Due to the huge interest since its launch the festival now has 2 circus tents offering a variety of shows from the world's best performers.

In addition to the Circus, the Giant Street Theatre has been a popular part of Sziget for over 10 years, with with one of the highlights being Argentina's Fuerza Bruta who performed their critically acclaimed 'The Bubble' show in 2015.

Art has always been a part of Sziget too, with installations around the island since the very first edition. In 2014 the ArtZOne was launched, giving szitizens the opportunity to try out different art forms and to create arts and crafts. The main focus are re-cycled materials and with the help of the most prominent artistic groups there are many opportunities to be creative. Sziget also runs the Art of Freedom project where designers, sculptors, artists or just enthusiastic "amateurs" from all over the world can apply to build their giant installations at the festival.

These non-music programs are the 'Soul of Sziget' making the festival vibe a real cultural experience and make Sziget stand out from other festivals.

In 2015 Sziget once again won the the 'Best Major Festival' award at the European Festival Award.

In 2016 Sziget had a great start to the year at European Festival Awards Sziget winning another award, this time for the 'Best Line Up'.

Moving forward Sziget strives to be the biggest multicultural events of Europe bringing together like minded people from over 100 different countries to the Island of Freedom.