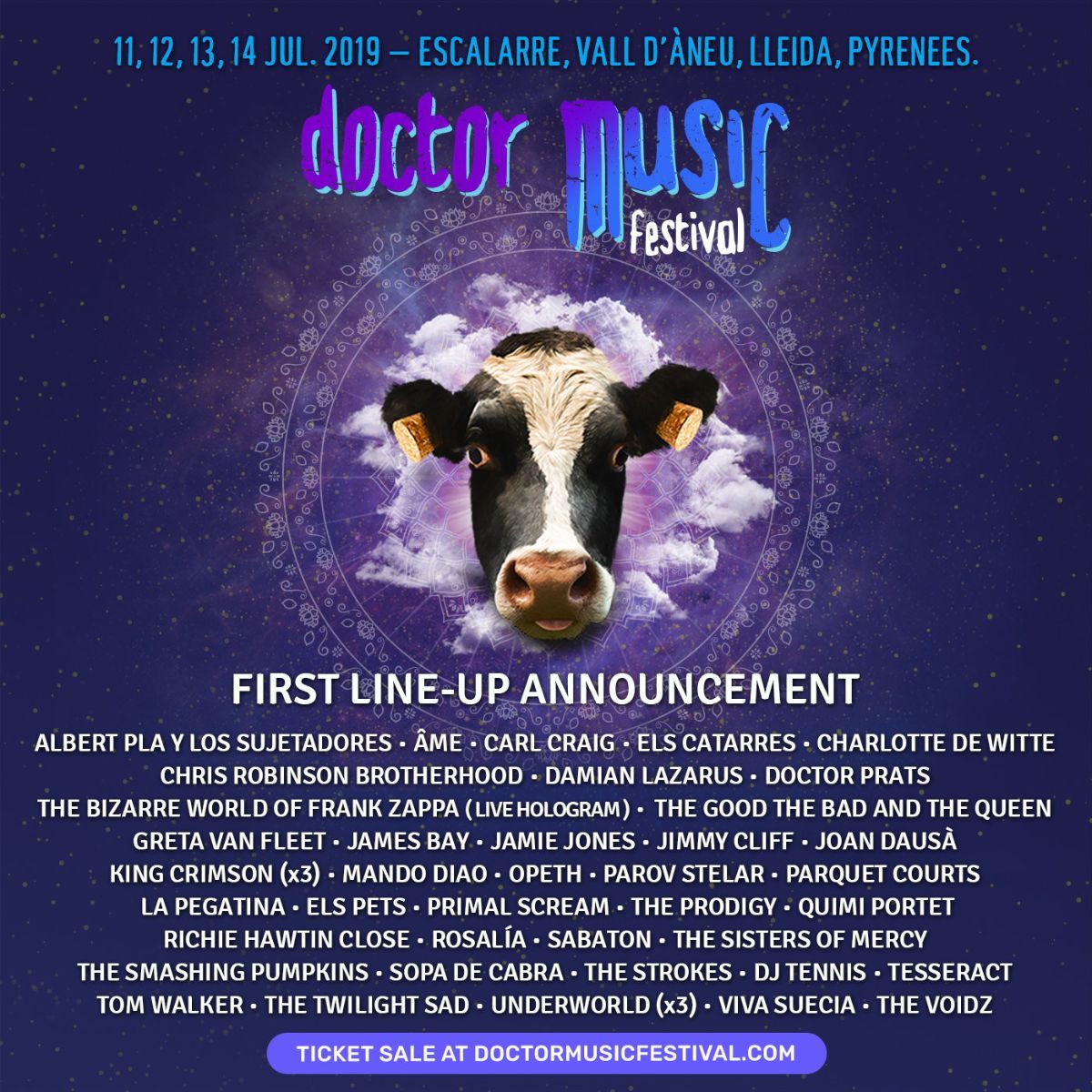 Doctor Music Festival has announced its first wave of artists for the 'reincarnation edition' of the festival in 2019 including a pioneering idea where a number of acts will perform at numerous times throughout the festival.

Both KING CRIMSON and UNDERWORLD will perform three different sets at the festival. A pioneering idea that will allow the public to have more than one opportunity to see the shows they like and, in addition, the greatest fans will be able to see their favourite artist more than once.

These two big names will join the line-up to offer for the first time and exclusively three different shows in the same festival, in what will be one of the initiatives of the DMF to reduce the anxiety generated among the public by the worry of missing any of the key concerts of a festival. As explained recently in an interview in Mondo Sonoro Neo Sala, Director of the DMF: “The fact of going to a festival and having to run to go and catch someone play… Our festival will not be an accumulation of concerts, a collection of cards… I do not want people to have the feeling that they will miss something out something if they do not run… the famous FOMO effect (“fear of missing out”) that you get in those big events will be notoriously reduced at the Doctor Music Festival”.

The artists have received with great enthusiasm this innovative initiative and in this regards, Robert Fripp (founder and undisputed leader of King Crimson) recently made these statements: “In strange and uncertain times there are moments in which a reasonable person could despair. But hope is unreasonable, and the power of music to unite people is a good reason to have some hope. King Crimson has the privilege to perform three times at the Doctor Music Festival. Each setlist will be different but, until the morning of the show, we won’t know how it will be”.

The best representation of the highest levels of music of all genres reaches the line-up of the Doctor Music Festival 2019. An edition to enjoy artists who are already legends and others who will soon be, as it happened in previous editions. Music to dance under the stars that can almost be touched. The most diverse names of all genres and eras will arrive at Escalarre on July 11th, 12th, 13th and 14th. The highest musical quality for all tastes and styles will once again be one of the hallmarks of the Doctor Music Festival.

The new edition of the festival will feature pioneering initiatives such as three different shows that will be offered by bands such as King Crimson and Underworld; novel and different experiences such as an hologram of Frank Zappa that we will be able to see in The Bizarre World of Frank Zappa or Albert Pla and Los Sujetadores with a super band specially created for the occasion.

In 2019 we will have the trendiest artists such as Rosalía, Parquet Courts, Greta Van Fleet or Viva Suecia, along with the exquisite timeless rock of The Smashing Pumpkins, The Strokes, Primal Scream, The Sisters of Mercy or the excellence of the super group The Good The Bad and The Queen.

With electronic music as part of the DNA of the Festival, that one day opened the party in Escalarre, we will have great exponents such as the pioneers The Prodigy with its unique electronic punk rock or a reference name like Richie Hawtin amongst many others.

A carefully curated and eclectic line-up where we could not miss the best in modern metal with powerful bands like Sabaton, Opeth or TesseracT, which will soon be joined by more names.

Four days for the authentic lovers of music, nature and of vital experiences that will make the public enjoy much more than just concerts.

Sustainability, innovation and special experiences will make this festival something unique and different. The magical getaway for the days 11th, 12th, 13th and 14th of July. Four days in a place so perfect that will seem unreal; without tension, without stress, with authentic food, in an ideal campsite and with all the facilities for all budgets. All this can be found in the Marketplace of doctormusicfestival.com available from tomorrow 20 of December.

To this first advance of the line-up more names will join in the first months of 2019 until completing the final line-up of the Reincarnation Edition of the Doctor Music Festival.

Do not miss out on what is to come… this has only just begun! Many more acts TBA.
The complete line-up will be released in early 2019.

Information and ticket sales at www.doctormusicfestival.com