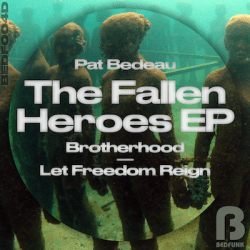 UK DJ producer Pat Bedeau reveals his first release for 2016 on his own Bedfunk label with his fantastic 'The Fallen Heroes EP' – a release that pays musical homage to the great Malcolm X and Dr Martin Luther King. With a topical theme calling for unity and freedom amongst all men running through the EP, 'Brotherhood' is deep hypnotic groove that features samples from Malcolm X's speech from 1964 Oxford Debate. 'Let Freedom Reign' samples Dr Martin Luther King's "I have a dream" speech, which is laid over bubbling deep and infectious jazzy groove and teased with a dramatic breakdown. The release date for 'The Fallen Heroes EP' is actually set as March 26th, which is anniversary of when Dr Malcolm X and Dr Martin Luther King met for the first and only time in 1964.

"This release is a very personal one to me as both the vocals have always had great meaning to me even though they were coming from very different angles. With Dr King, he spoke of peaceful protest and Malcolm X communicated by whatever means necessary. These 2 speeches from these great men are now iconic and are still as relevant today. Their lives and deaths did so much to change the way we live today and have influenced me throughout my life. Yet there still seems more to do in the war of racial equality and to bring their messages to a new generation in a modern form, feels like it honours their words and lives" – Pat Bedeau

The Brotherhood EP will be released on March 26th 2016 on Bedfunk Records.