99 Souls x Crookers - The Girl Is Mine (Crookers Remix) 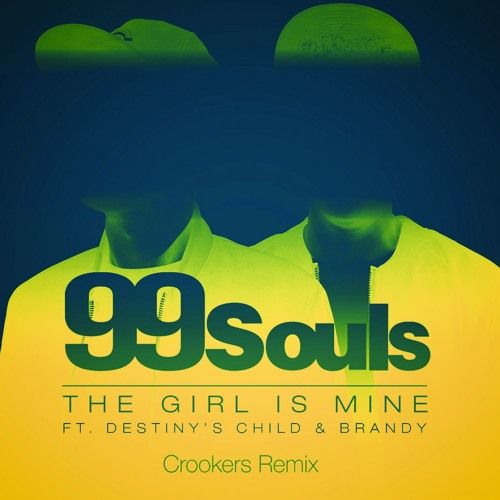 99 Souls x Crookers - The Girl Is Mine (Crookers Remix)

When everyone from Beyoncé to Pete Tong loves your record, you know you've pretty much stumbled upon music's Holy Grail: the credible club crossover cut. This elusive accolade escapes most careers but the mysterious 99 Souls – arguably the hottest newcomers to the house world – have struck gold with their very first release, 'The Girl Is Mine featuring Destiny's Child and Brandy'. The single, which contains re-recorded vocals from Brandy and a sample from Destiny's Child's 'Girl', is available 6th November and will impact on 11th December via Resilience Records/Nothing Else Matters/RCA Records.

The duo catapulted onto the scene at the end of 2014 and took their 100% self-promoted debut "The Girl Is Mine" to number 1 on the BBC Radio 1 Dance Chart and number 1 on Shazam in towns and cities across the UK. This unprecedented breakthrough led to 40 labels courting the UK duo.

The band said "The original "Boy Is Mine" is Brandy and Monica arguing and the Destiny's Child song is from a woman's perspective, we wanted to tell a story from a man's perspective. It started off as a promotional track to get our name out there."

Having played a string of festivals this summer, including Creamfields, Lovebox, Bestival, Reading and Leeds, as well as numerous dates in Ibiza, the band are currently recording new material.

With their first records racking up airplay from Annie Mac, Pete Tong and Danny Howard as well as some of the biggest DJ/producers on the planet including Afrojack, Martin Solveig and Laidback Luke, there seems to be no telling what will happen next.