The Hempolics drops the visuals for their latest single ‘Bongadashi’ ahead of their upcoming second album Kiss, Cuddle & Torture: Volume 2’. The band will also support Toots and the Maytals farewell UK tour in May.

In the words of the band’s mainman and producer Grippa Laybourne – who has previously worked in the studio with a variety of international top acts like Mattafix and Faithless – ‘Bongadashi’ is “a pure British reggae-funk stomper full of swagger and verve”. The song is about the inherent danger on the streets whether in London or Port of Spain in Tobago, the home of Hempolics collaborator Franz who lends the vocals to the track. “When fear comes out of the blue, when you’re walking down the street and someone starts on you not sure whether you’re safe or not on the streets – Bongadashi coming,” Grippa adds.

The Hempolics’ blend of Reggae, Hip-Hop, Dancehall and Pop has already been heavily supported across UK national radio by BBC Radio1, BBC 1Xtra, BBC Radio 2 and BBC 6Music, where the band had three playlisted singles. They went on to have 6Music ‘Album of The Day’ and were subsequently chosen by Liz Kershaw’s pick for ‘Album Of The Year’, after an impressive live session for Lauren Laverne.

‘Bongadashi’ is another stand out track and a statement of intent ahead of their forthcoming sophomore album and support slot on the Toots and the Maytals farewell UK tour in May, playing at O2 Academy in Bristol on Friday 15th May, London’s O2 Academy Brixton on 16th May, Leeds’ O2 Academy on Fri 29th May and Manchester’s O2 Apollo on 30th May. 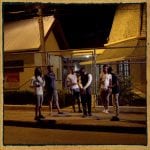